GPD continues to iterate on its Pocket 2 line of handheld computers.

A top-of-the-line model with an Intel Core m3-8100Y processor, 8GB of RAM and 128GB of storage continues to sell for $669 to $750, depending on where you buy it from. But late last year the company introduced a cheaper model with a Celeron 3965Y processor and 4GB of RAM.

Now GPD has another option, for folks that are willing to settle for the slower processor but not the smaller amount of RAM.

You can now order a GPD Pocket 2 Amber Black Edition with 8GB of RAM and a Celeron 3965Y chip from Indiegogo for $540 or $516 from GeekBuying. 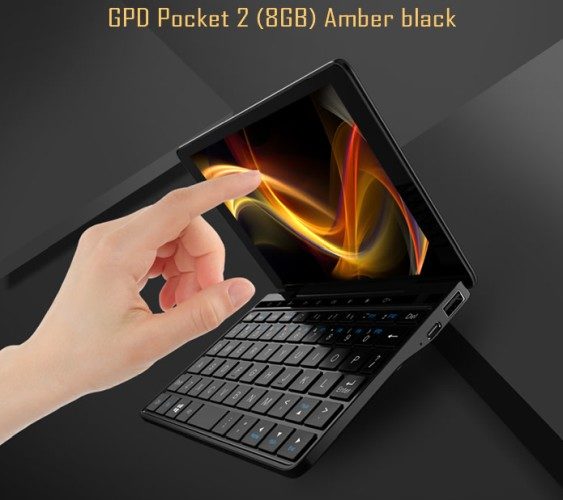 As the name suggests, the new model has a black chassis, which helps set it apart from the standard GPD Pocket 2 (which has a silver case).

Aside from that cosmetic difference, the biggest change is the processor. While both the Core m3-8100Y and Celeron 3965Y are 4.5 watt processors, the Celeron chip lacks support for hyperthreading and turbo boost, has less cache, and generally scores a lot lower in benchmarks.

On the bright side, it’s a lot cheaper, which is why the Celeron model of the GPD Pocket 2 costs more than $200 less than the Core m3 model.