The upcoming GPD Pocket 2 is a handheld computer with a 7 inch full HD display, a QWERTY keyboard, and a laptop-style design. As the name suggests, it’s a second-generation device and the new model has a faster processor, a redesigned keyboard, and some other improvements. 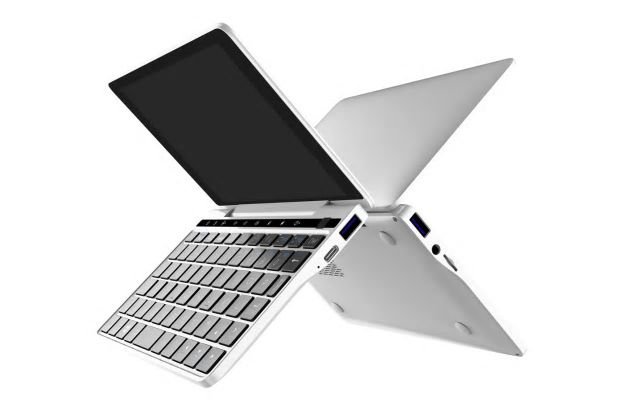 Backers can reserve a Pocket 2 for a pledge of 3,499 RMB or more, which is about $515 in US dollars. The goal is to ship the Pocket 2 to backers by the end of September.

US and international prices are expected to run about $529 and up for early bird backers of the Indiegogo campaign and then go for $569 to $639 during the campaign, or $729 to $789 once the campaign ends.

It supports 802.11ac WiFi and Bluetooth 4.1 and features a microSD card slot, a USB Type-C port, and two USB Type-A ports. The tiny computer is powered by a 4.5 watt processor that should offer a serious performance boost over the original GPD Pocket… but like its predecessor, the new model features active cooling, so you’ll probably hear some high-pitched noise from the fan from time to time.

In order to make more space for the keyboard, GPD opted for a new design that omits the pointing stick that was placed above the space bar in the original GPD Pocket. But when potential customers expressed disappointment with the lack of any pointing tools, the company added an optical touch sensor to the strip of buttons above the keyboard, along with left and right-click keys on the other side of the touch bar, allowing you to move a cursor and click without using the touchscreen or an external mouse.

That said, while the new GPD Pocket 2 is a bit sleeker looking than its predecessor, the main upgrade is the processor.

When the original Pocket hit the market, it basically had no competition. There was nothing else like it available at the time. Now GPD has a competitor: the One Mix Yoga. That device adds a few features that the Pocket lacks, including a backlit keyboard, a 360-degree hinge that lets you transform the computer into a tablet, and an active digitizer with support for pressure-sensitive pen input.

The Pocket 2 has none of those features. But the One Mix Yoga has one major failing: it’s slow as molasses. The original Pocket has a faster processor than the One Mix Yoga, and the Pocket 2 has a CPU that’s even more powerful. So at this point you can choose between a faster device that will ship later this year, or a cheaper, slower device that can be used in more ways.

It’d be nice if you could buy a One Mix Yoga-style device with the same Core m3 processor used in the GPD Pocket 2, but nobody’s selling that yet.

Meanwhile, it looks like a newer, faster Intel Core m3 chip is on the way. I can’t wait to see one the One Mix Yoga 2 and/or GPD Pocket 3 spec sheets look like.

I’m hoping to get my hands on a GPD Pocket 2 demo unit soon. But until I get a chance to run some tests, offer impressions, and tell you how it compares to other tiny computers, the next best thing may be a hands-on article from Gizmodo Japan.