GPD has been making handheld computers for a few years, starting with the GPD Win line of small gaming computers and following up with the GPD Pocket line of mini-laptop computers.

This year the company is launching a new category, starting with the GPD MicroPC. It’s the company’s smallest mini computer to date — and also the cheapest. You’ll be able to pick one up for $299 during a crowdfunding campaign set to begin on February 15th.

It’s expected to have a retail price of $399 when the MicroPC is made more widely available later this year. 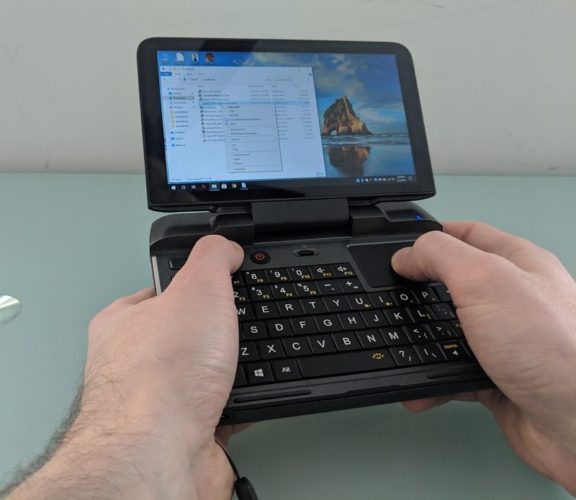 Smaller, cheaper… what’s not to like, right? Well, for one thing, the MicroPC is powered by an Intel Celeron N4100 processor and just 4GB of RAM, making it slower than its sibling. For another, it’s got a tiny keyboard with an awkward layout that makes typing a bit difficult.

That might not be a major problem if you’re a network administrator looking for a tiny, portable computer that you can use to enter a few commands at a time or a casual user looking to surf the web or play some games on the go.  But I wouldn’t really want to use this computer to type out long documents, text messages, or emails.

So let’s take a closer look at the GPD MicroPC’s keyboard.

Wait, how do you use this thing?

There are a few things I should probably mention before we get into the keyboard itself. The first is that the GPD MicroPC does not have a touchscreen display. On a full-sized laptop that wouldn’t be an issue for most users. But on a handheld device, it feels natural to reach up and touch the screen — something I’ve found myself doing over and over in the weeks that I’ve been testing this little computer. 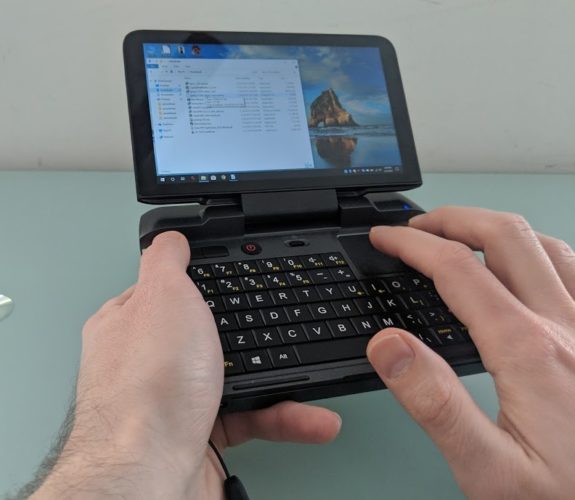 The second thing is that you probably don’t really need a touchscreen on this device. There’s a touchpad above the right corner of the keyboard. It’s large enough to comfortably place two fingers on, and the touchpad supports multi-touch input, so you can use two-finger scrolling and tapping, among other gestures.

But if you’re holding the MicroPC in your hands, it would be hard to use multi-touch gestures to do things like right-click, so there’s also a set of buttons above the left side of the keyboard, for right-click, left-click, and center-click actions.

The third thing? This keyboard is tiny. 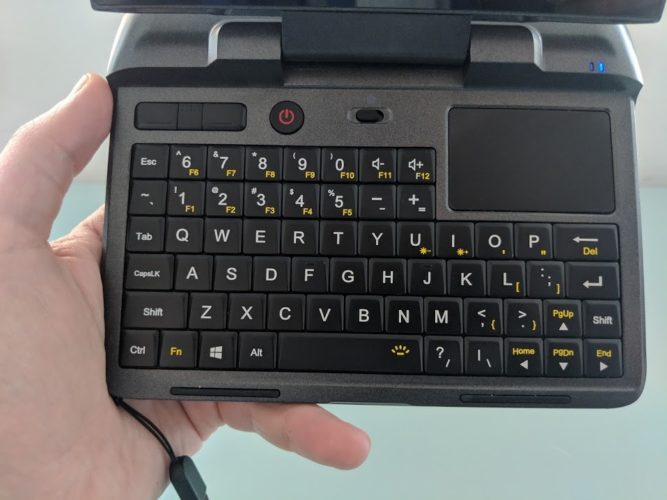 GPD’s newest computer measures just 6″ x 4.5″ x 0.9″ so there’s not really a lot of room for a full-sized keyboard in this 1 pound computer. The keys are small and there’s virtually no space between them, although the keycaps are raised a bit to make it a little easier to feel where one ends and the next begins.

Some keys also have to serve double-duty. Fn+U dims the screen, while Fn+I brightens it. Fn+O gives you an apostrophe and Fn+P types a quotation mark. the L key is also the left-bracket key, and the key next to it is used for colon, semicolon, and right-bracket. 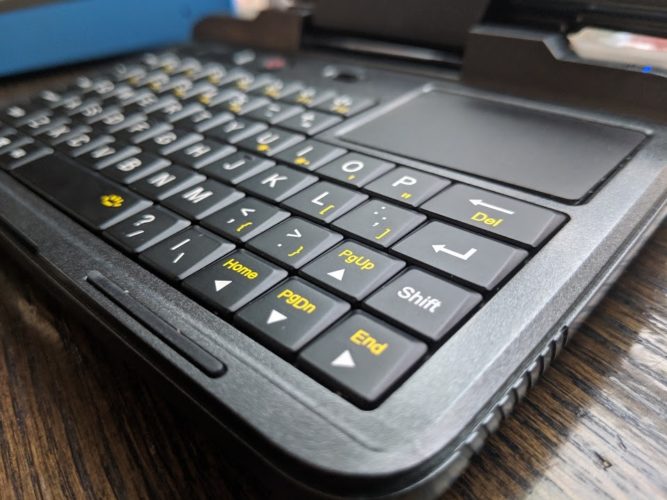 All of which is to say that even after using the GPD MicroPC on and off for a few weeks, I still sometimes have to take a moment to remember where the key I’m looking for is located. This happens most frequently when I need to type an apostrophe or quotation mark. 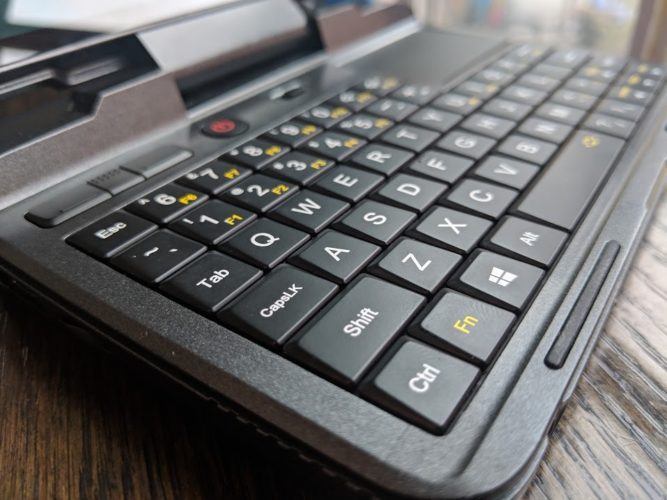 Since the keyboard sort of wraps around the touchpad, there are more keys on the left side of the MicroPC than the right. This allowed GPD to include number keys, F1 through F12 keys, volume buttons, and dash and equal sign buttons, among other things. But ir’s yet another thing to get used to. 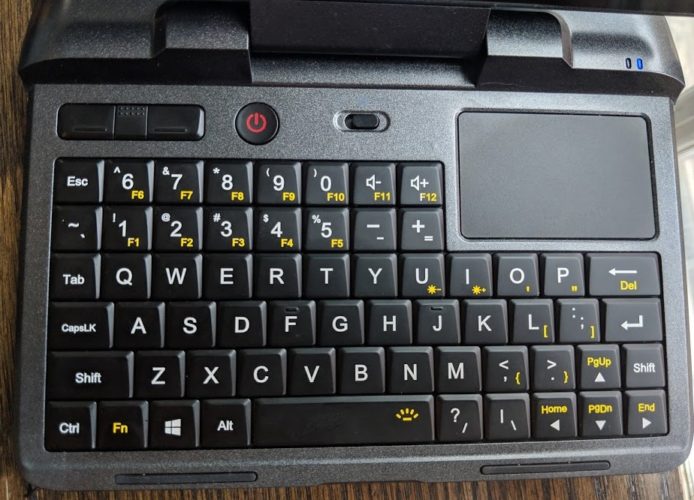 There are two ways you can type on the MicroPC: hold the computer in your hands and reach your thumbs across the keyboard to type, or place it on a surface and try to attack the keys with your fingers as if you were using a larger device.

When I attempt to thumb type, I can usually tap out around 30 to 35 words per minute, as measured by TypingTest.com. I can go a little higher when I put the computer down, since this makes it possible to use more fingers — I can’t easily use ten fingers, but I can maybe use a combination of four or five fingers to type.

Yep. I can enter text on my phone more quickly than I can on the GPD MicroPC.

Your results may vary, depending on your level of comfort with tiny, thumb-sized keyboards. If you’ve spent a lot of time with BlackBerry devices, for example, you might find the MicroPC easier to use than a virtual keyboard. Some people prefer the tactile feedback that comes from using physical keys. 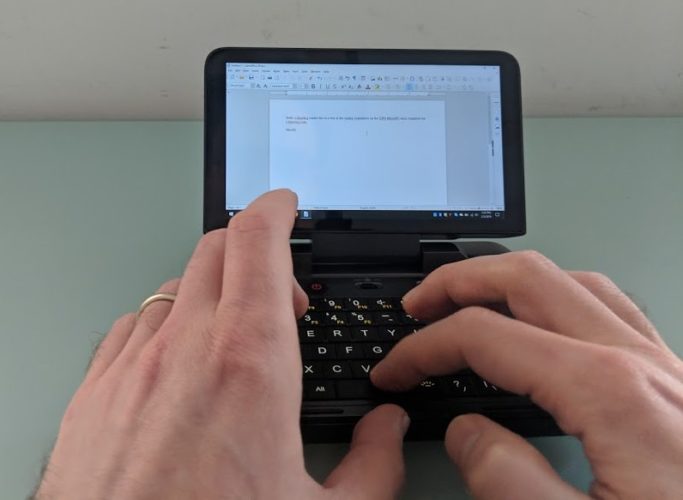 Personally I find there are a few things holding me back when typing on this little computer. One is that you have to press each key fairly hard. It takes more pressure to type on the GPD MicroPC than it does on most laptop keyboards, and far more pressure than you’d apply to a touchscreen device such as a phone or a tablet.

Another issue is that the keys are so small, close together, and unusually arranged that touch-typing is difficult. I normally don’t have to look at a laptop keyboard as I type, but I do find myself staring at the MicroPC’s keyboard while typing… and that has a tendency to lead to typos. 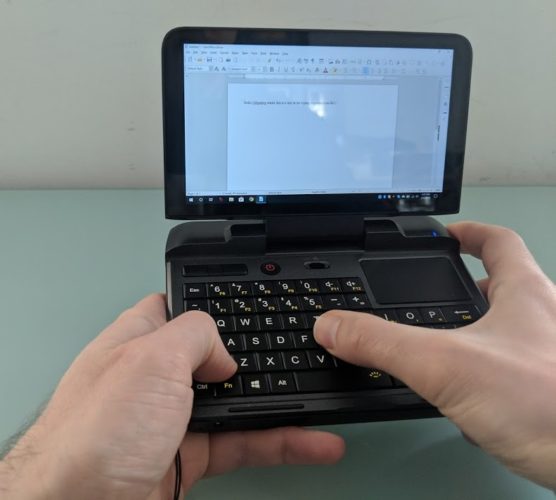 For example, while shooting the demo video for this article, I was staring at the keys instead of the screen so I didn’t notice that I had hit the Caps Lock key instead of the Shift key when capitalizing a letter… and that caused me to write a series of words in all caps, reducing my typing speed and accuracy.

So can you type on the GPD MicroPC? Sure. Is it a particularly pleasant experience? Not really.

But that may not be a problem, depending on how you plan to use the computer.

I’ve been fascinated by handheld computers since I picked up my first HP Jornada and tried to install JLime (Linux) on it. The MicroPC is one of the most intriguing I’ve seen in a while thanks to its compact size, affordable price tag, and decent set of ports (including full-sized HDMI, Ethernet, and Serial ports, a USB Type-C port, and three USB Type-A ports).

But I’ve come to the conclusion that this is not a computer for people in my line of work: writing. 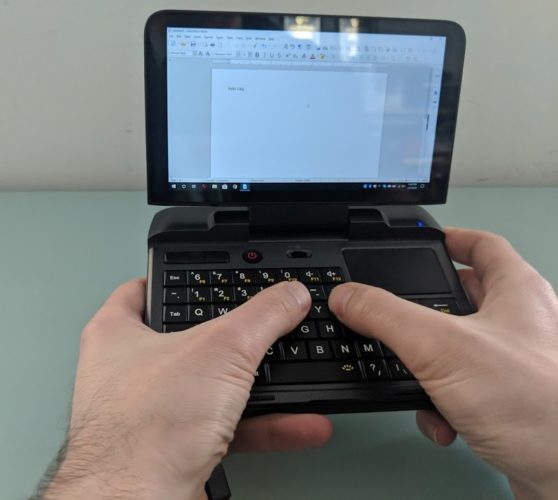 I tried writing an article for Liliputing using nothing but the MicroPC. It was a painful experience, and just typing out several hundred words of text took several times longer than it would have on a larger computer.

In a pinch the MicroPC could be a nice device to have if I needed to edit an existing article on the go — but I can already do that on my smartphone.

But there are a lot of things you can do with mobile computer that don’t involve a lot of writing. need to enter a few text-based commands, enter some usernames and passwords, and maybe write some short responses to messages? The keyboard is certainly adequate for those tasks.

Meanwhile, you could use the MicroPC to surf the web, watch videos, view and make minor edits to documents, play casual games, or perform a bunch of other tasks that don’t require much typing. 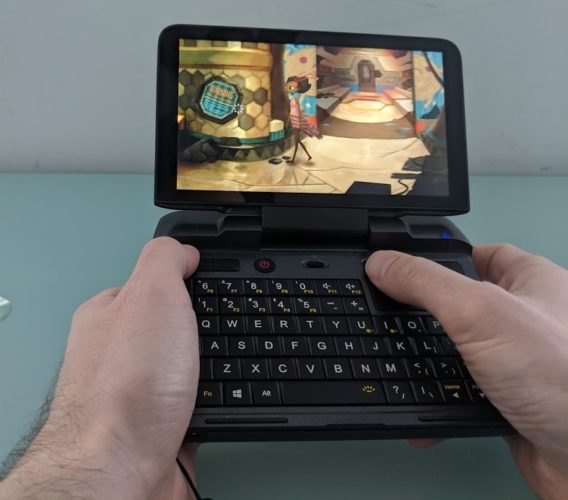 If you are looking for a handheld computer with a keyboard that you can use for touch-typing, the GPD Pocket 2 is probably a better bet. It has a 7 inch, full HD touchscreen display and a larger keyboard that’s much more comfortable to use while touch-typing. It does cost more than the MicroPC, but GPD recently added a newer/cheaper configuration, which means you can pick up a Pocket 2 with a Celeron 3965Y processor, 4GB of RAM, and 128GB of storage for around $430.

Liliputing’s full review of this tiny PC should be ready to go soon. Here’s a sneak peek:

While I’m obviously not entirely sold on the keyboard, it does offer a decent price/performance ratio. I wouldn’t recommend it to anyone looking for a PC they could use as their primary computer. But it could make a nice secondary device for some folks. And with more full-sized ports than you’ll find on most handheld computers, it could be an invaluable tool for tech workers looking to use it as a mobile computer to augment their existing toolkit.