The upcoming GPD Pocket 2 Max is a tiny laptop by modern standards… but the 1.5 pound laptop with an 8.9 inch display is actually the largest computer GPD has launched to date. The larger screen and keyboard should make it easier to get work done. And GPD is adding features like a webcam and touchpad.

GPD unveiled promotional materials for the little laptop a few weeks ago. Now the company is showing off the GPD Pocket 2 Max at Japan IT Tech Week, where @KPL_ and PC Watch got a chance to see it in person.

The real-world images make it clear that the new laptop is substantially larger than the GPD Pocket or Pocket 2, both of which had 7 inch displays and lacked touchpads or pointing sticks.

Interestingly, GPD seems to have stuffed a webcam into the hinge rather than atop the screen. While it’s certainly a space-saving way to add a webcam, it’s a little unfortunate to see a company adding a knuckle-cam at a time when even Dell’s XPS 13 line of laptops are moving away from that camera placement.

Another interesting design choice? The GPD Pocket 2 Max doesn’t have an SD card reader. It does have a user-upgradeable PCIe SSD if you want more storage though, so I guess that’s an option.

Here’s a run-down of the specs for the GPD Pocket 2 Max:

The thing I’m most interested in is the keyboard. As much as I love the recent revival of UMPC-style, pocket-sized computers, a common complaint is that it’s hard to touch type at full-speed on a tiny keyboard. I’ll be curious to know whether the Pocket 2 Max hits that sweet spot between portability and usability that makes it a viable option for use as an on-the-go computer for getting real work done.

You can find more pictures at PC Watch.

Update: Engadget Japanese also got a chance to check out the GPD Pocket 2 Max at Japan IT Week and the site has posted some more pictures.

Meanwhile, GPD posted some of its own pictures to Facebook, including a nice shot of the company’s existing and upcoming mini PCs. 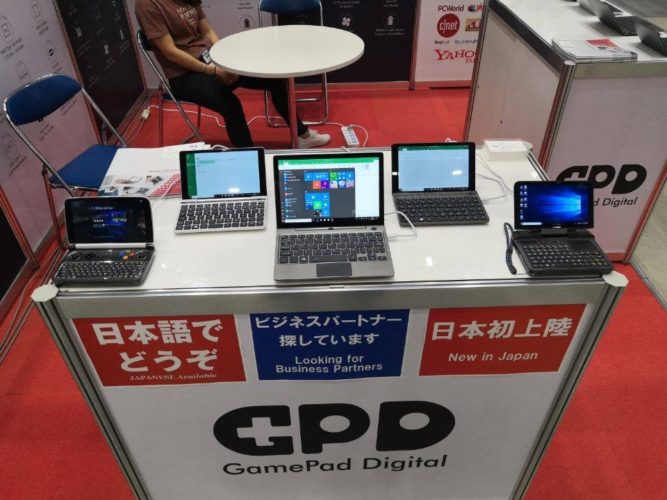 And if you’re wondering what it’s like to type on the Pocket 2 Max’s keyboard, GPD Tweeted this short video:

The real device of Pocket2 MAX, is that bigger? Yeah, but a little bit. pic.twitter.com/c8755KU4FY