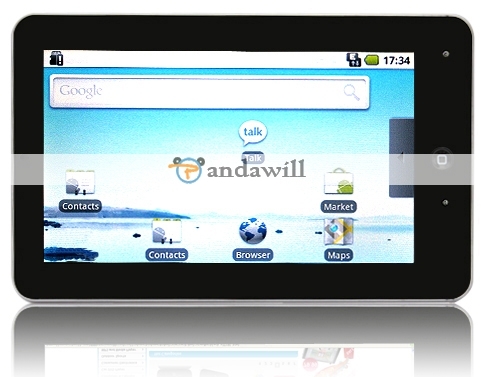 The Augen GenTouch78 Android tablet is getting a lot of attention because it sells for less than $170 at KMart. But while it’s one of the cheapest Android powered device you can buy, it’s kind of a pain to use at this point thanks to a resistive touchscreen that’s not particularly sensitive and a few other quirks like the lack of an accelerometer which makes rotating the display pretty difficult.

There are a few tricks that make things easier. For instance, I’ve been using the tablet for a few days and I’ve noticed that if you install the Aldiko eBook reader you can rotate the display to portrait mode while you’re reading a book. I’m still looking for a good alternative to the unresponsive on-screen keyboard.

But if you’re looking for a tablet that comes with some features that are absent in the GenTouch78, you might want to take a look at the Gpad G10. this table tis about the same size, and runs $185. But it has a built in camera and an accelerometer.

The Gpad G10 has 2GB of built in storage, support fro 1080p HD video playback, and 256MB of memory. It has a Telechips 8902 ARM 11 based processor, which is the same as the one used in the Augen Gentouch78. But the Gentouch78 CPU is clocked at 600MHz while the specs for the Gpad G10 say this model will have an 800MHz clock speed.

The G10 has a 7 inch, 800 x 480 pixel touchscren display, which I’m assuming is a resistive touschreen. It also has 256MB of memory, a 0.3MP camera, and a 2600mAh battery as well as a 3.5mm headphone jack an HDMI port, whereas the Augen GenTouch78 simply has a spot on the side of the case that says HDMI (with no actual port).

With the same CPU, memory, and storage space as the Augen GenTouch78, I wouldn’t expect the Gpad G10 to be a miracle tablet. But it does look like an interesting alternative for budget Android tablet shoppers.