Now it looks like a price hike is on the way.

Update: Skype has issued a response, stating that it is changing the price of Skype Number subscriptions and that “in some cases the incorrect price was included” in the email messages it sent out. The company says it’ll be communicating the correct pricing next week.

The rest of the original article continues below. 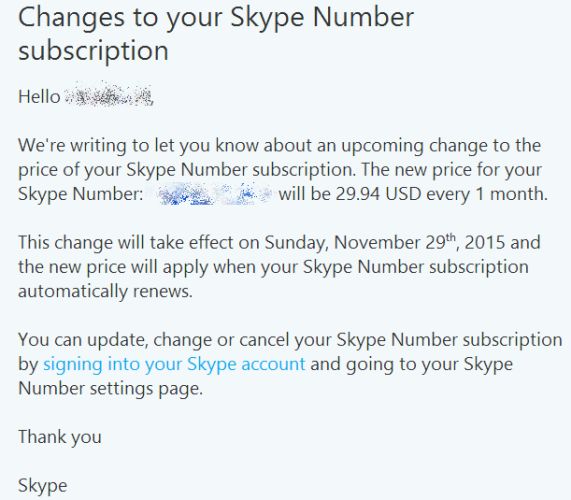 I’ve had a Skype Number for almost a decade and for much of that time I’ve paid about $24 per year for the number. But this morning I got an email from Skype telling me that the rate was about to go up to $29.94. Per month.

What’s particularly odd about these changes is that if you sign up for a new Skype Number, the price will be much lower.

Currently Skype tells me I can get a new number for $6.50 per month or pay $39 for a 12-month subscription to get a 50 percent discount.

Hopefully this means that the emails Skype users are receiving are in error. But Skype and Microsoft haven’t weighed in on the matter yet.

Anyway, I haven’t actually used my number for much recently, so this is a good reminder that I can save $24 (or more) per year by simply canceling the service.

15 replies on “Got a Skype phone number? You rates might be going up (updated)”