Google’s Project Fi is a wireless network that does a few things differently. First, it uses a combination of WiFi and cellular networks so that your phone makes calls or accesses the internet over WiFi whenever possible… but seamlessly transitions to a mobile network when you leave a hotspot.

Second, the cellular network is actually made up of several different cellular networks: in the US that includes T-Mobile, Sprint, and US Cellular. A Project Fi phone will automatically connect to whichever network has the strongest signal.

Now Project Fi also includes coverage from international wireless carrier Three… and Google says that means you can now get high-speed internet access when traveling to over 135 international destinations. 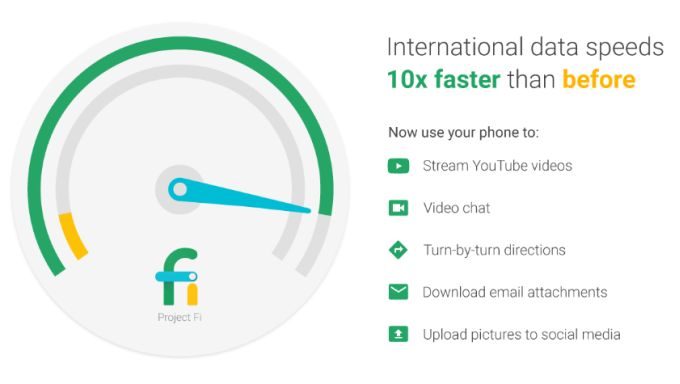 Google says that means travelers should get data speeds that are 10 times faster than before in the most popular travel destinations for America, including London, Paris, Berlin, and Tokyo.

Prices haven’t changed: you still pay $10 per gigabyte of data and Google will reimburse you for any data you paid for, but didn’t use.

There are a few catches:

If you don’t already have one of those phones, Google will be running a promotion on the Nexus 6P for the next week. Starting today at 1:00PM Eastern, you’ll be able to pick one up for $150 off (bringing the starting price for a 32GB model to $350).

Or you could take advantage of the Amazon Prime Day deal and snag a 64GB model for $404.