There are a lot of projects designed to help kids learn to code… so that instead of just using games and apps developed by others, they learn the basics of creating their own software at an early age.

Google’s Project Bloks takes a different approach to most, because it focuses on tangible programming. In other words, kids learn to code not by typing characters onto a screen, but by snapping a series of physical blocks together. 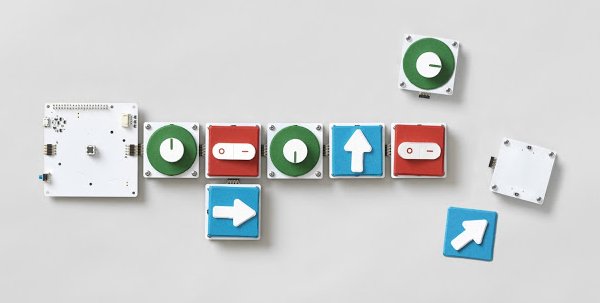 Anyone can design Pucks. They can be be designed as buttons, knobs, or dials and programmed to deliver instructions such as “jump,” “move left,” or turn on or off.” Since they have no active electronics, all you need is conductive ink and paper, plastic, or another material. Then place the Puck on a Base Board and it will send messages to a capacitive sensor to be passed along to the Brain Board.

As I write this out, it all sounds kind of complicated. But the idea is that many young children learn things best when they get to literally go hands-on… so instead of learning how to build and alter a set of instructions by typing on a keyboard, tangible programming lets them physically assemble and rearrange a series of modules to make something happen.

Google and IDEO have created a Coding Kit reference design, but it’s not yet clear exactly what the future holds for Project Bloks. For now, Google is conducting a research study and looking for developers, educators, parents, and others interested in participating.