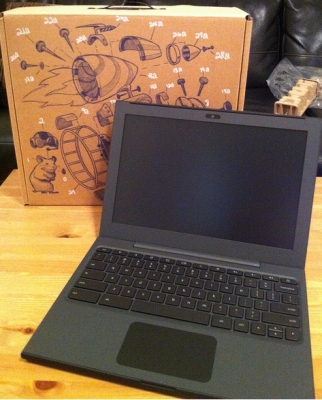 Just a few days after Google unveiled the Cr-48 Chrome OS notebook, the company has begun sending out demo units to a select group of beta testers. Ben Kessler received one about an hour ago, and posed the first unboxing photos on Flickr.

Kessler reports that the build quality seems to be good, and the case has a rubberized plastic feel, but the battery doesn’t sit flush with the bottom of the laptop.

The Cr-48 has a 12.1 inch display, 802.11bn WiFi, a Gobi 3G wireless chip, and an 8 hour battery. The keyboard has been optimized for Google Chrome, replacing the Caps Lock key, for instance, with a Search key — although you can change the settings to enable Caps Lock if you really need that function.

Google is sending the laptop out free of charge to testers. Only about 60,000 units will be made available. Acer, Samsung, and other PC companies are expected to produce consumer-oriented Chrome OS laptops which will go on sale in mid-2011.

You can find some more photos at TechCrunch, as well as Engadget, which appears to have received its shots from a different Cr-48 recipient.