Most modern smartphones have a front-facing camera which you can use to snap selfies. And while it may not be as secure and accurate as the Apple TrueDepth camera that powers Face ID on the iPhone X, you can also use the front cameras on some phones to login to your device using facial recognition.

Now two researchers at Google have added gaze tracking to not only let your phone recognize your face, but also to let you know if someone is peering at your phone over your shoulder.

They’ll demonstrate their “electronic screen protector” at the Neural Information Processing Systems conference next week, but a brief video demo gives you an idea of how the software works. 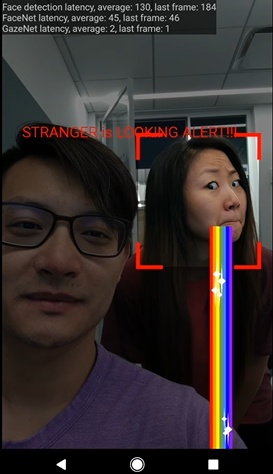 While there are already systems that let you unlock your device by looking at it, the new software helps protect you from spying eyes when your device is already unlocked.

In the demo video, for example, the phone detects when someone standing behind the phone user is peering at the phone and it stops showing a text messaging app and instead pops up a screen showing the spy.

It’s unclear if Google has any plans to incorporate this software into future versions of Android or release the tool as a standalone app. But at the very least, this technology demonstrations shows that the front camera can be used for a lot more than just snapping selfies.

via The Android Soul