After dipping its toe in the smart wireless router space last year by partnering with Asus and TP-Link, Google has begun selling its own WiFi routers. The aptly-named Google WiFi is a $130 router that you can set up and control using a smartphone app, making it easier to manage than most traditional routers.

If you’re looking to set up a wireless network covering 1,500 square feet or less, that’s all you need. But a key part of what makes Google WiFi special is the way two or more routers can work together to spread coverage over a larger area.

First introduced in October, Google WiFi is now shipping to customers. While the $130 model router is available from the Google Store, Amazon, and Best Buy, you can also pay $300 for a 3-pack… although that option seems to be sold out at every store right now. 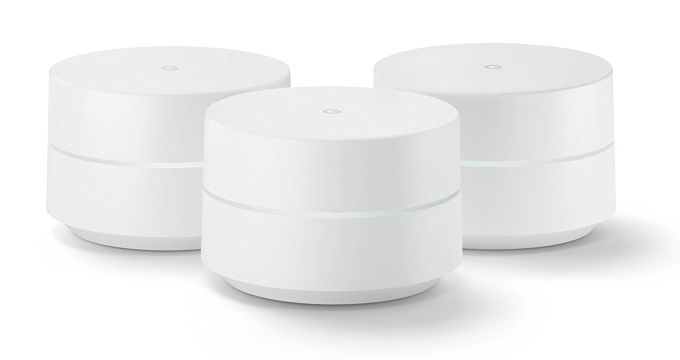 Google isn’t the first company to offer a WiFi system that uses mesh networking. Rivals including Amplifi, Eero, Luma, and Netgear entered the space before Google, all in an effort to provide more reliable WiFi performance in the home (and maybe to make a bit more money by selling customers two or three products instead of just one).

But Google WiFi is pretty competitively priced, and early reviews from The Verge, Android Central, Android Police, Engadget, 9to5Google, and others describe Google’s offering as attractive, effective, and simple to set up… although power users or folks looking to set up a wired internet network may want to look elsewhere.

Google WiFi has no web interface, which means you can only manage the system using a mobile app. And if you want to dig around in more advanced settings, you’re pretty much out of luck. There are only two Ethernet ports: one for input and one for output.