Google’s Search app for Android lets you search the web, ask questions, set alarms, and perform other actions just by talking to your phone. Now Google’s making it easier for folks who speak more than one language to use the feature.

Up until recently the Voice Search function has only been able to recognize one language at a time: you’d select a default language and then you’d have to speak in that language to use Voice Search.

Now there’s a new version of the Search app which lets you select up to 5 languages. 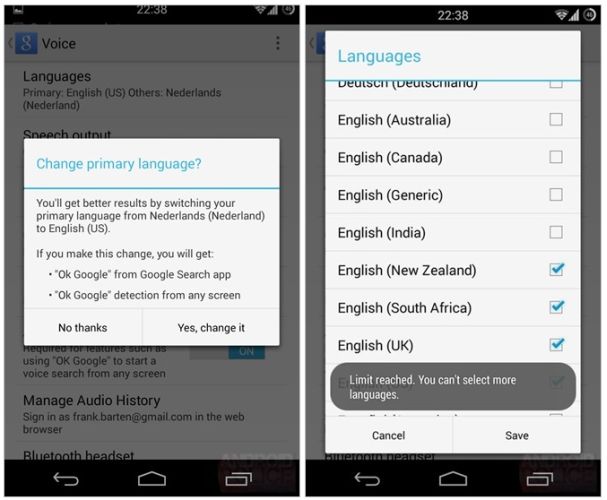 That means you can speak to your phone in any of the languages you select and it should respond. You don’t have to dive into settings to switch between languages.

While this might not be that useful for native speakers of English (or Afrikaans, Dutch, French, German, Spanish, Russian, or any of the other supported languages), it could come in handy for multi-lingual users who regularly switch between languages or who might not know or remember the word for “temperature” at the moment they want to ask Google for a forecast.

Not only does the new feature let you ask different questions in different languages… you can even use multiple languages to form the same question. So “¿dónde está la library?” should help you find out where the nearest biblioteca is.

Google developers announced they were working on the feature in July and it should be rolling out to users soon.