Yesterday Google pushed an update to the Google Music Android app based on user complaints about how much data the app gobbled up starting with the last major update. When the company introduced the All Access service at Google I/O and subsequently updated the app to take advantage of unlimited streaming, the setting that controlled for audio quality was set to Stream At Highest Quality by default. If you’re not the type of person to go digging in the settings right away, you might not have noticed this. And if you’re on a tiered data plan and started using Google Music, you might have used up your entire allotment quite quickly. 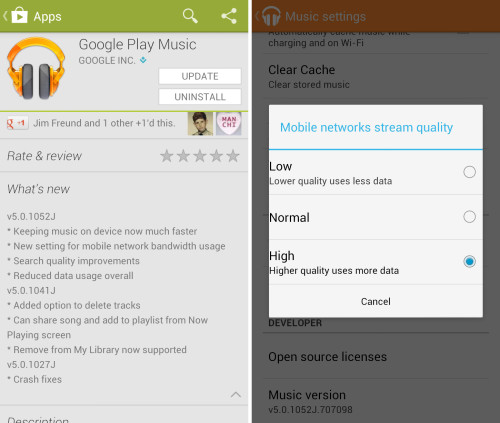 The new version of the app offers some relief from that by offering three different choices for streaming over networks: Low, Normal, and High. The app promises to reduce data usage overall as well. While these are nice steps, it’s probably a good time to consider just not streaming when you’re on mobile data.

In the settings menu there are several useful options designed to help keep mobile data usage down, such as streaming or downloading only when Wi-Fi is connected. The radio stations cache as they play, an option you can turn off, and you can set the app to automatically cache when on Wi-Fi. Beyond all of that, you can save any radio station’s song list as a playlist for offline use. If you do that while you’re at home or work on speedy Wi-Fi, there will be no need to use mobile data at all while you’re out. This update should make the process even faster so you can grab a bunch of songs right before you walk out the door. It requires some forethought, but if you want to avoid overages it’s worth it.

Coincidentally, this may be one of the ways All Access sets itself apart from the upcoming iTunes Radio. Apple didn’t mention giving users the ability to download radio stations to iPhone or iPad for offline listening.

Head over to the Google Play store to get the latest Google Music update. If you don’t see an update option on your device, don’t panic. Apparently Google is pushing the update on a rolling basis.