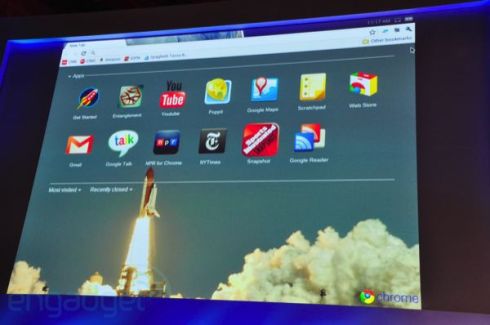 Google held an event this afternoon to showcase its upcoming Chrome OS software for notebooks. Chrome OS is basically an operating system based around the Google Chrome web browser. It’s designed to surf the web and run web apps rather than native apps — although users will be able to run some web apps such as Google Docs even when there’s no Internet connection available.

Chrome OS won’t be ready for the public until next year, but today Google emphasized several key features. That includes the speed of the OS and the browser, with enhancements like “Crankshaft”, graphical acceleration that can take advantage of GPU hardware acceleration and WebGL. The company also stressed the simplicity of design and use, and security of the upcoming Chrome 9 and OS platform.  The Chrome OS even supports a guest mode that runs in Incognito mode to ensure privacy and a new user account can be set up in under a minute, even on a freshly installed system.

Additional features like Chrome Sync will let you sync everything now, bookmarks, extensions, and other data. Google says it will take less than a minute to set up a new Chrome OS netbook, since you just have to login to your account to retrieve your data.

Google also unveiled the Google Web Store today, which will let users “install” web apps in Chrome. The store appears to have a well designed interface and potentially very useful apps, such as NPR, Amazon Windowshop and New York Times apps and games like “Poppit.” While app purchases are naturally tied to your Google account. It remains to be seen how Google’s web store will compare to other app stores like the iTunes App Store or Google Android Market — especially since the apps can all be run in any modern web browser that supports the same web standards as Chrome, but the apps look intriguing .

The Web Store is already open for business, and users can install apps using the Chrome web browser or Chrome OS operating system.

The first notebook to run Chrome OS will be the Cr-48, a notebook Google will be rolling out in small quantities as part of a pilot program. Next year Acer and Samsung are expected to launch the first commercially available Chrome OS notebooks.

Or if you don’t want to wait that long to use an operating system designed around web apps, you could always download Jolicloud 1.1, which was released today.