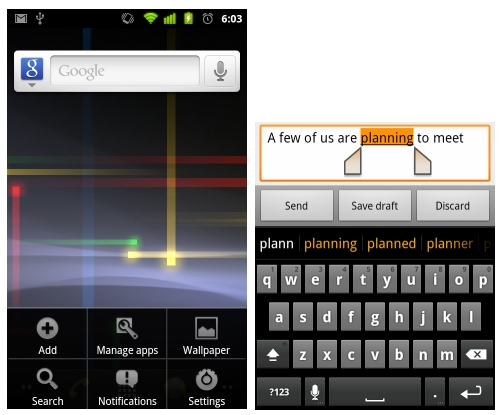 Google has released the Software Developer Kit for Android 2.3. The company is also introducing the Google Nexus S smartphone which will be one of the first to run the updated operating system. It will be available for purchase online or at retailers including Best Buy and Carphone Warehouse starting December 16th in the US and December 20th in the UK.In the US, the phone will be available either unlocked or tied to the T-Mobile network.

The Nexus S was built by Samsung and features a 1GHz Hummingbird CPU, 802.11b/g/n WiFi, Bluetooth 2.1, GPS, an accelerometer, gyroscope, 5MP camera, and support for Near field Communication. It has 512MB of RAM and 16GB of storage. While the Nexus S will be the new developer phone from Android, I suspect we’ll see Android 2.3 pushed out to the Google Nexus One in the coming days, with updates for other phones hopefully coming soon as well.

Android 2.3 includes a new and improved on-screen keyboard, better power management, integrated support for VoIP and Near-field communication, and much more. You can find some of the highlights at Mobiputing.