I’ve been using Google Calendar on the web to confirm appointments, manage my to-do list, share my schedule with family, and generally keep organized for years.

The Google Calendar Android app, on the other hand, has left a lot to be desired. So I’ve been a third-party app that syncs with Google Calendar, but offers features and layout options that are more useful.

But last year Google started sprucing up its Android app with some of the previously web-only features. And according to the folks at xda-developers, it looks like one of the biggest missing features may be coming soon: integration with Google Tasks. 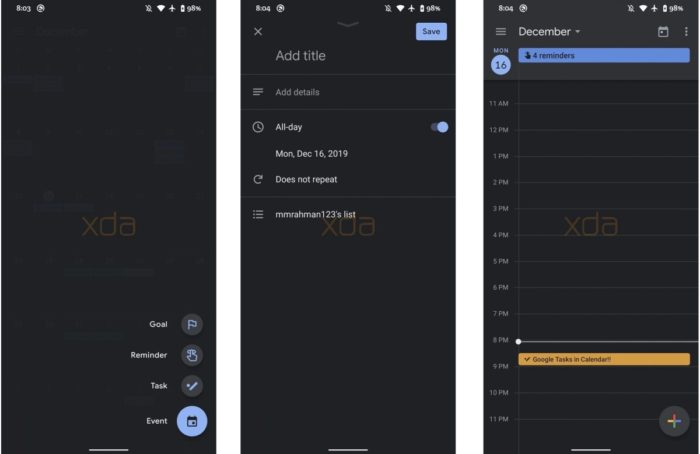 It’s been two years since Google launched a standalone Google Tasks app for Android, offering a barebones to do list experience. If you’re just looking for a good mobile task manager, there are plenty of better alternatives.

But I haven’t opted for any of those, because I use Google Tasks with Google Calendar on the web… and I want a mobile app that puts both of those things in one place. And up until now that’s required the use of third-party apps that plugin to Google’s Calendar and Tasks APIs.

But xda-developers did a teardown of a recent version of the Google Calendar Android app and found that not only did it contain references to Tasks, but Mishaal Rahman was able to modify the app to enable Tasks integration — he also found a promo from Google suggesting that it should be coming to all users soon.

As you’d probably expect, once Tasks integration is complete, you’ll be able to create a new task within the app, assign it to a tag/category, set a due date and time, and decide if it’s a recurring or one-time task. Then you’ll see you tasks displayed in the calendar view as if they were any other appointment — but with a custom tasks icon and an option to set a custom accent color or choose a different notification tone for tasks than you use for calendar appointments.