Want to turn your NVIDIA Shield or Google Nexus Player into a digital video recorder? Then all you need is a current-gen HDHomeRun TV tuner and the latest version of the “Live Channels” app.

Google and HDHomeRun maker SiliconDust have worked together to add DVR functionality to Android TV. 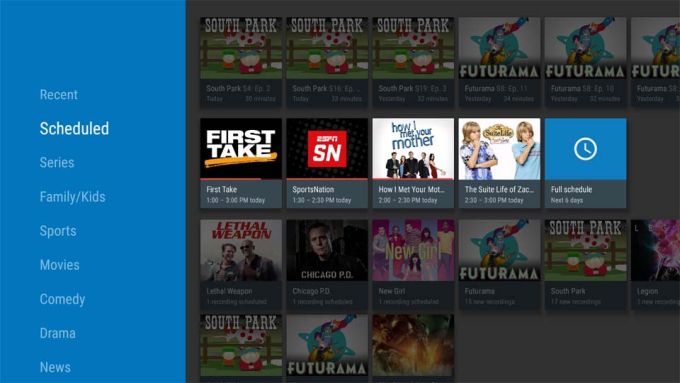 The initial release only supports the two Android TV devices listed above, and they’ll need to be running Android 7. You’ll need a USB 3.0 hard drive to store your recordings, and SiliconDust says you’ll want to have at least 50GB of disk space free (although 500GB is recommended).

And there are a bunch of limitations: you can only record one channel at a time, encrypted channels cannot be recorded, and stored recordings are only viewable on your Android TV device — you cannot transfer them to a computer, phone, tablet or other device to watch. There’s also no way to tell the DVR not to record rebroadcasts of older episodes.

Right now the service is also only available in the US, and while over-the-air and cable broadcast recordings are supported, the lack of support for “DRM flagged cable channels” effectively means that many users will probably only be able to record shows using a broadcast antenna.

SiliconDust also notes that the guide data is provided by Google and that any bugs with the program guide should be reported to Google.

That said, if you’ve already got an HDHomeRun Connect, Extend, or Prime TV tuner and one of the supported Android TV boxes, this is certainly worth giving a try.

I’d wait to see more user testimonials before deciding to go out and buy any new hardware for the express purposes of building your own DVR though.

via Android Police and /r/AndroidTV