Google’s latest version of the Google Search app for iOS brings some of the best features of Google Now to the iPhone and iPad. Up until now some of those features had been Android-only.

One of the biggest changes is support for notifications and reminders, which lets Google Now alert you automatically when it has something to tell you about upcoming appointments, traffic conditions, flight delays, or other information.

Google Now also gets support for hands-free voice operation in the latest update. When the Search app is open, just say “OK Google” to start a search. 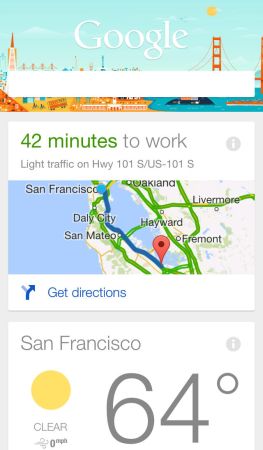 That hands-free voice search feature only works on an iPhone 4S or later. You can also ask Google to remember things by saying something like “Remind me to buy milk at the grocery store” and Google Now will alert you when it’s the right time or you’re at the right place.

The app can also remind you about upcoming episodes of a TV show, albums from musicians, or other headlines involving stars or politicians. Google Now has new cards for organizing movie and concert tickets, boarding passes, and other information. And the search app has a simplified homepage, support for new gestures, and one-touch sign-in for other Google Apps.