There’s a lot of data on the web, and Google does a pretty good job of indexing as much of it as possible. But as mobile devices have become more common, some information is locked away in apps. Google’s been indexing in-app content for a few years, but up until now the company could only provide search results if there was also corresponding content available on a website.

Now Google is going a step further and offering search results that include content that may only be available in apps… and if you’re wondering how you’re supposed to use that information without installing the app, Google has a new solution: the company will stream some apps over the internet, allowing you to perform some actions without installing an app first. 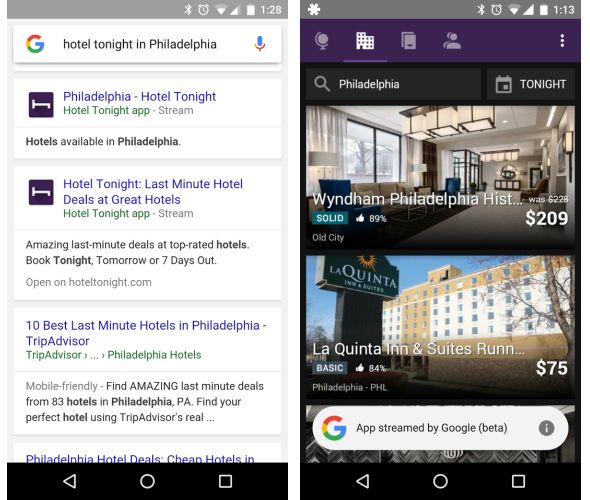 At launch only a handful of apps are available for streaming, including Hotel Tonight, Daily Horoscope, New York Subway, and Visual Anatomy Free.

If you see a Stream button next to a search result you can tap it and the appropriate app will open up as if it were running natively on your device. But as TechCrunch reports the apps are actually running on virtual machines on Google’s servers.

In order to use the feature you’ll need:

For now you’ll also need to be in the US and using English as your phone’s language. But when it works, it allows you to check weather conditions, book hotel rooms, read your horoscope, or perform other actions just as if you were using a native app.

If you want to install the app, you can tap the Google icon in the corner and choose the Install option to get the app from the Google Play Store. 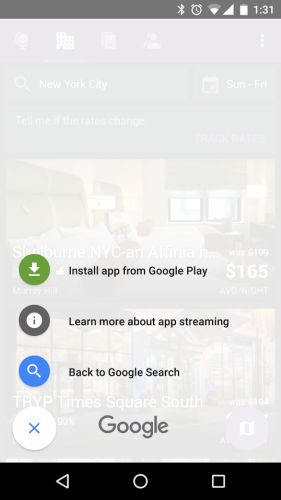