The latest version of Google Android is the first to include native support for phones with display cutouts (notches) and dual cameras. So in some ways Google’s software is playing catch up to existing hardware. But in other ways, Android 9 Pie is looking toward the future with new features that could lead to longer battery life, and which could help you use your phone less so that it’s not a constant distraction that keeps you up at night.

Google says it will also roll out to all third-party phones that are eligible for the Android beta program by this fall. The first has already announced that an update is coming today: the Essential PH-1 is getting Android 9 on the same day as Google’s Pixel devices. 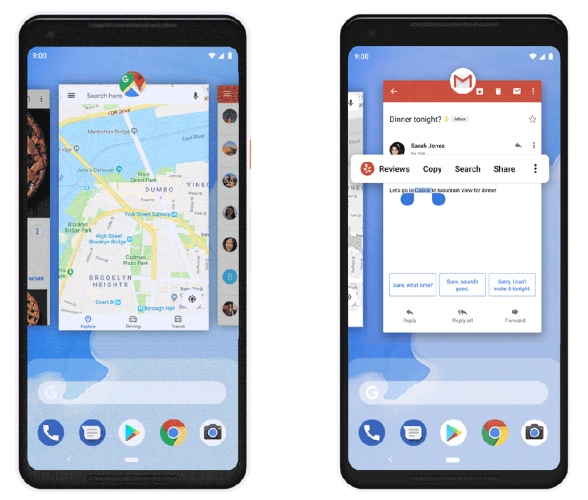 So what else is new in Android 9? Well first of all, we know that the P stands for Pie. And second, there’s a new navigation system that replaces the home, back, and recents buttons that have existed for years.

Now there’s a single home button in the center. You can swipe up to see an Overview window with full-screen previews of recently used apps. Or you can tap the button to return home.

More often than not you’ll also see a back button to the left of the Home button, but you won’t see it on the home screen (since there’s nothing to go back to), and you won’t see a Recents button anywhere.

Google says battery-saving tools in Android 9 include an Adaptive Battery feature that learns which apps you use most frequently and gives them priority, and an improved Adaptive Brightness feature that notices how you manually change the brightness under different conditions and starts to do it for you automatically.

Android 9 also brings App Actions which will suggest actions based on different contexts. For example you might get navigation directions in the morning when you’re usually getting ready to leave for work. Or you might get a recommendation to play a favorite Spotify playlist when you plug in your headphones.

Google says it’s also bringing a feature called Slices to the Google Search app later this fall. When you start typing the name of an app you may see information from within that app show up in search results, letting you interact with the app before you open it. As an example, Google says you may see prices for a Lyft ride home from your current location, and you can tap the option to begin the process or requesting a ride.

The new Digital Wellbeing set of features are designed to help you resist the siren song of your phone. A Dashboard app will tell you how much time you’re spending on different activities with your phone. An App Timer will let you set limits. And a new Do Not Disturb mode will silence visual pop ups as well as audio alerts. There’s also a Wind Down option that can not only turn on Night Light to reduce blue light emitted by your phone when it’s time to get ready for bed, but which will also fade the display to grayscale to make it a little easier to resist the temptation to scroll through your social media feeds one more time (or a few dozen times) before setting down your phone. 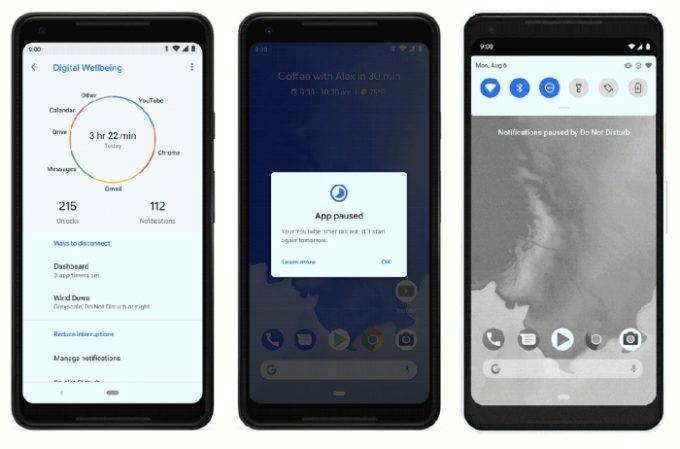 Google says Digital Wellbeing features will roll out to Pixel phones this fall and other devices later this year. But Pixel users running Android 9 can sign up for a beta starting today.

For developers, Google has also updated its neural networks API, added support for displaying more data in notifications, added support for notches, a multi-camera API, support for USB cameras, support for HDR VP9 Profile 2 and HEIF video and image formats, and a bunch of privacy and security enhancements. There’s support of indoor positioning using the 802.11mc WiFi protocol, improvements to the ART runtime, and much more.

Other new features in Android 9 include improved text selection, a new accessibility menu, an OCR in Camera feature that lets you select text in an image and have it spoken aloud, and support for connecting to up to 5 Bluetooth devices. Another Bluetooth update brings support for “sound delay reporting,” to keep audio on your headphones from going out of sync with the video playing on your screen.

There are also new enterprise features including the ability to  postpone updates for up to 90 days and a new Work tab in the launcher so that all your Work apps are in one place and your Personal apps are in another.