Android 7.0 Nougat is here. Google has released the first version of the operating system with native support for running apps in multiple windows that are visible at the same time.

Other major new features include support for a new virtual reality platform called Daydream (although not all phones will have the hardware to support it) and a series of updates that should improve performance and extend battery life.

Update: Google has released the source code and Nexus factory images for Android 7.0. 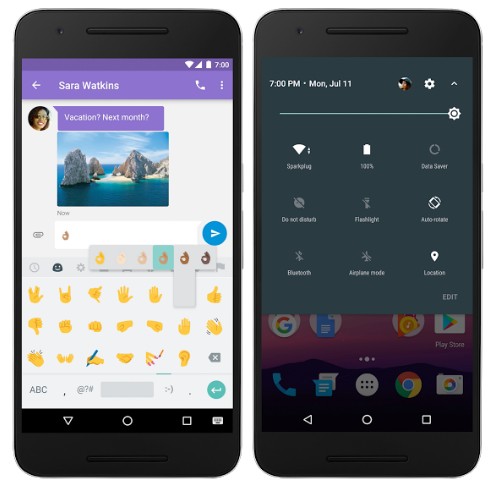 Software updates should begin rolling out soon for the Google Nexus 6, Nexus 6P, and Nexus 5X smartphones, the Google Pixel C tablet, and the Nexus Player Android TV box. The General Mobile 4G (which is an Android One phone) is also getting an update, as are any devices enrolled in the Android Beta program.

The first phone to ship with Android 7.0 pre-installed will be the LG V20, which means we probably won’t see new Nexus phones until after the V20 launches on September 6th.

Google is not releasing Android 7.0 updates for the 2013 Google Nexus 5 smartphone or the Google Nexus 7 (2013) tablet or any earlier devices.

Here are a few of the things that are new in Android 7.0:

The Quick Settings panel has also undergone a major revision, allowing you to rearrange and customize your Quick Settings, view just a few icons at the top of your screen for easy access before swiping down. Notifications now support “direct reply,” allowing you to respond without opening an app. And you can now change the size of icons as well as text/font sizes.

You can find more details at the Android 7.0 website.