When Google launched the first Chromebook Pixel in 2013, a lot of people scratched their heads. It was a laptop with some pretty phenomenal hardware (albeit not enough built-in storage space) that ran an operating system most people associated with dirt cheap netbook-like laptops.

I quite liked it, but acknowledged that the $1299 price tag made it a tough sell for anyone but Chrome OS diehards… or maybe folks who planned to install Linux on the machine.

But Google doubled down and released an updated model with even better specs in 2015. By then Chrome OS had evolved a bit… but the Chromebook Pixel still looked like a tough sell when you could buy a MacBook or premium Windows laptop for the same price.

Now another two years have passed and Google’s new Pixelbook is set to hit the streets next week. It’s got some of the best hardware to date, including a convertible design that lets you use the notebook like a laptop, plenty of RAM and storage, and most importantly, the latest version of Chrome OS which makes the new laptop a lot more useful at launch than any of its predecessors.

The early reviews are in, and while the Pixelbook still isn’t a laptop for everyone, it could have wider appeal than any previous high-end Chromebook from Google… you know, if you can get past the $999 starting price. 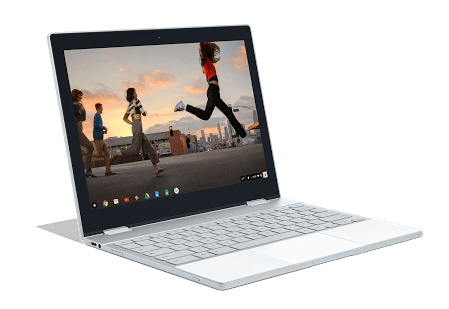 Chrome OS has always been designed as a desktop/laptop operating system. But up until recently it’s also been a very browser-centric OS that relied on web apps and cloud storage.

Over time Google started to add support for some apps that work offline. But things really kicked into high gear when Chrome OS gained support for native Android apps, giving you access to millions of third-party apps and games that you can download.

In addition to having a high-quality keyboard and premium design and specs, the Pixelbook has 12.3 inch, 2400 x 1600 pixel touchscreen display with support for pen input and a 360-degree hinge that lets you hold the 2.4 pound Chrome OS notebook like an Android tablet.

Chromebook Pixel laptops have always had ample RAM, but for the first time Google is also offering the kind of storage we’ve come to expect from a laptop. The entry-level model has an Intel Core i5 Kaby Lake processor, 8GB of RAM and 128GB of storage. The top-tier model (priced at $1649) has a Core i7 CPU, 16GB of RAM, and a 512GB SSD.

The Pixel Pen is sold separately for $99.

There’s also a Core i5/8GB/256GB model for $1199, but this is one of those cases where you probably don’t need to pay for the extra storage unless you really need it. 128GB is already more than you get on most Chromebooks. And the Core i7 processor might be overkill (although it does seem a little odd that Google is putting out a laptop with top-tier specs in late 2017 but the company didn’t opt for  newer 8th-gen Intel Kaby Lake Refresh quad-core processors).

As Gizmodo points out, the Pixelbook still isn’t aimed at power users that want to tweak their PC settings or play bleeding edge games. It’s designed for folks who view a computer as a portal to the internet… and in that light, it’s a pretty nice portal that does most of what you need and little of what you don’t.

If you don’t mind the relatively big screen and heavy weight, the Pixelbook may also be one of the best Android tablets you can buy, since you get the option of using a full Chrome web browser and a keyboard when you need it.

The Pixelbook isn’t for everyone. It isn’t even for all Chrome OS fans. Think of it like the Kindle Oasis of Chromebooks: a premium machine for folks that are already sold on the concept and who are looking for a better experience than you get from entry-level hardware.

And if you like the hardware but still aren’t sold on Chrome OS, I suppose you can always just install Linux.

Here are some of the first reviews of the Pixelbook:

For the most part, reviewers seem to love the hardware and have mixed feelings about the software. But if you’re gung ho on Chrome OS and have a lot of spare cash lying around, it sounds like you’re likely to be pleased.