As expected, the Google Pixel C tablet is now available from the Google Store for $499 and up. The tablet comes from the same team that designs Google’x Chromebook Pixel laptops and features an aluminum and glass design, a Pixel LED light bar on the back, and some of the best specs available for an Android tablet in late 2015.

The show-stopping feature might be the optional $149 keyboard though. It connects to the tablet using nothing but magnets, allows you to adjust the screen angle between 100 and 130 degrees, and uses inductive charging to keep the battery topped of when it’s covering the tablet, so you’ll probably never have to go out of your way to charge the keyboard. 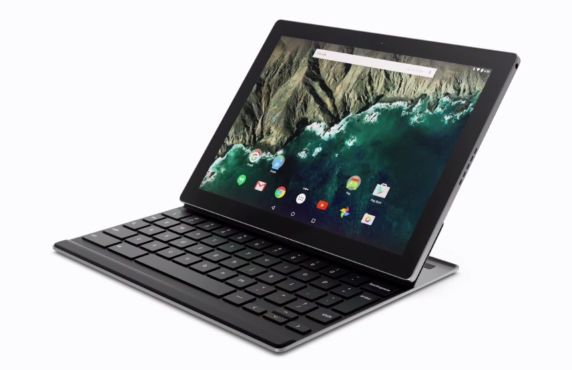 The tablet has a USB Type C port with support for fast charging.

If you’d prefer a different keyboard style, Google is also offering a $149 Pixel C Folio keyboard which acts as a leather case for the tablet.

While Google has partnered with other device makers to design and sell Nexus tablets in the past, the Pixel C is the first tablet that’s entirely a Google device from start to finish. Not only will it ship with the latest version of Android 6.0 Marshmallow, but Google says it will release software updates every 6 weeks, just as it does for Chrome OS devices.

Arguably nobody needs to pay $499 or more for a decent Android tablet. There are plenty of more affordable options available. But the Pixel C is basically the Chromebook Pixel of Android tablets: a device that’s designed and supported by Google and which shows what a high-quality, premium model looks like.

Google’s perfectly happy to encourage companies to release $149 Chromebooks. But when Googlers decided to build a laptop that they would use on a day-to-day basis, they went for best-in-class keyboards, displays, touchpads, and other hardware. The Pixel C takes a similar approach to the tablet and Bluetooth keyboard space: it’s a system with unique elements including a keyboard with laptop-like travel and a special button that brings up an on-screen menu for icons that wouldn’t fit on the keyboard itself.

What’s weird is that the Pixel C is positioned as a 2-in-1 tablet that could potentially replace a laptop in some instances… but Android itself doesn’t support multi-window apps or other features you’d expect from a laptop-like device. Mobile versions of desktop apps like Office and Photoshop are often lacking features. And you’ll often encounter mobile versions of websites rather than desktop versions.

With the combined price for the tablet and keyboard starting at $649, I have to imagine Google doesn’t expect to sell a lot of Pixel C devices. Instead the company’s designers made a product they wanted to use and they’re offering it to anyone willing to pay the laptop-like price for the hardware. At least it’s cheaper than a Surface Pro 4 or iPad Pro.