The Google Pixel 6 and Pixel 6 Pro smartphones are expected to launch this fall, but we got an early look at the phone’s new design last week, thanks to a leak from Jon Prosser and Front Page Tech.

But now @OnLeaks and Digit have a closer look and some more details about the larger model.

The Google Pixel 6 Pro is expected to be a smartphone with a 6.7 inch curved AMOLED display, a single hole-punch camera on the front, and a row of three cameras plus an LED flash on the back. 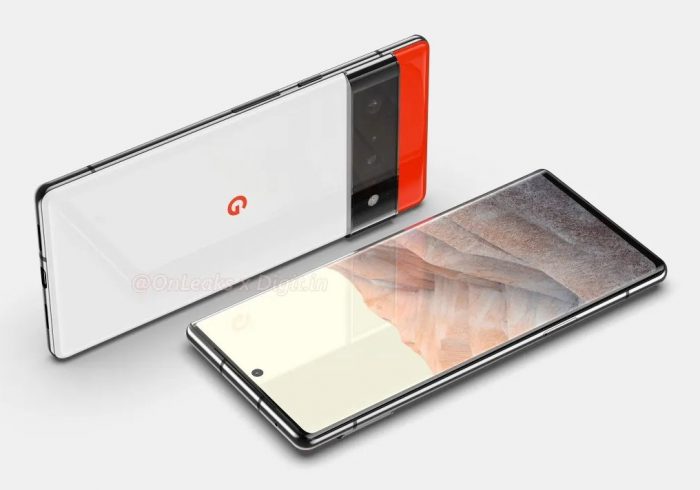 One of those three rear cameras is expected to be have a wide-angle lens, while another is a periscopic telephoto camera. There’s no word on what the third camera does.

While there’s still no information about the phone’s memory, storage, or price. But according to the latest leak, we can expect the phone to have stereo speakers, wireless charging support, and a body that measures 163.9 x 75.8 x 8.9mm, although the camera bump will be 11.5mm thick.

There’s no visible fingerprint sensor, but Prosser had previously reported that’s because the phone will have an in-display fingerprint reader.

Fans of smaller phones will also have the option of picking up a non-pro version that’s just called the Pixel 6, but not only will that model have a smaller screen (and battery, most likely), but it’ll also have two rear cameras rather than three. It’s unclear which Pixel 6 Pro camera will be left out from the standard Pixel 6.

It’s possible that these will be the first Pixel smartphones to ship with a Google-made processor rather than a Qualcomm processor, but details are a little light at this point.

You can find more images and other details at Digit.

Update: @OnLeaks and 91mobiles have released rendered images and more details about the non-Pro version of the Pixel 6. It’s expected to have 2 rear cameras instead of 3, and the display is a 6.4 inch flat screen rather than a larger curved display. But honestly, the phone isn’t all that much smaller, which might explain why one is the Pixel 6 and the other is the Pixel 6 Pro rather than Pixel 6 XL.