Google’s next Pixel smartphones are on track to launch later this year, with a budget Pixel 5a smartphone likely coming sometime around August, and the new flagship Pixel 6 expected to launch this fall.

We’ve already seen leaks indicating that the Pixel 6 will be one of the first phones to ship with a Google-made processor. Now it looks like the phone will also have a brand new physical design. Or rather, I should say phones, because according to Jon Prosser and Front Page Tech, there will be two models: a Google Pixel 6 and a larger Google Pixel 6 Pro. 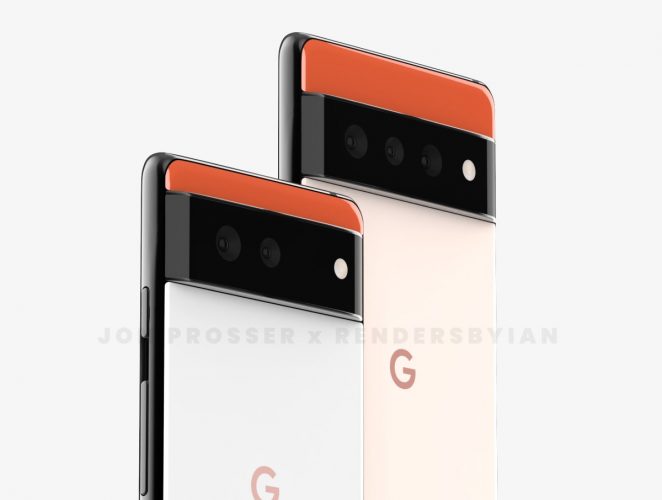 While Prosser doesn’t have detailed information about the phone’s specs, he says he received a series of real-world photos showing prototypes of the upcoming smartphones, and worked with a graphic artist to convert those images into renderings in order to protect the source.

Here’s what we can glean from those images:

Both phones have a 3-color design, with a black camera strip and separate colors above and below it. There will be at least a few different color options available (although Android Police writer Max Weinbach says that while the Prosser’s designs look accurate, the colors do not).

Keep in mind, though, that nothing is official until Google makes an official announcement, and Prosser does have a mixed track record (take this alleged Pixel 5 leak, for example).

Assuming the latest info is accurate, there’s still no information on what kind of cameras the phones will have, but I’d be surprised if the Pixel 6 Pro didn’t have primary, ultra-wide, and telephoto lenses, while the Pixel 6 will be missing one of the latter cameras.

According to an April report from 9to5Google, the Pixel 6 will feature Google’s GS101 processor, code-named “Whitechapel.” And xda-developers posted a follow-up with some details about that processor, which is expected to be a 5nm chip featuring ARM Mali graphics, a TPU (tensor processing unit) and a security feature called “Dauntless,” which seems to be related to Google’s Titan M security chip.

It also has a 3-cluster CPU design, expected to consist of:

Signs point to this processor being competitive with Qualcomm’s Snapdragon 700 series processors rather than the higher-performance 800 series, so hopefully that means Google’s next-gen Pixel will have an upper mid-range price tag much like last year’s Pixel 5 and Pixel 4a 5G.