Google will probably unveil its next-gen Pixel smartphones in October, along with some other gadgets (like maybe a new Chromebook and/or a Pixel watch). But we don’t have to wait until then to get a pretty good idea of what to expect from the upcoming Google Pixel 3 XL smartphone, because a bunch of units seem to have fallen off a truck recently.

Not only do we have a pretty good idea of what it looks like, but detailed reviews have already been published online.

As for the smaller Pixel 3? We haven’t seen much. But now a handful of pictures have been posted imgur (via reddit), giving us an idea of what to expect from the Pixel 3. 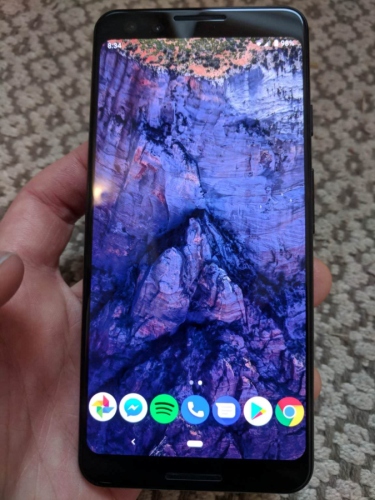 The back of the phone looks a lot like the Pixel 3 XL, only smaller. There’s still a fingerprint sensor on the back, a single camera next to an LED flash bulb, and a two-tone design with a matte bottom and a glossy top

The front of the Pixel 3, on the other hand, appears to lack the controversial notch found in the Pixel 3 XL. Instead there are small bezels above and below the screen, and slimmer bezels on the left and right sides. The corners of the display are rounded.

According to some screenshots, the Pixel 3 has a 5.5 inch display with a resolution of 2160 x 1080 pixels. That sounds like a big step up from last year’s 5 inch Pixel 2, but the slimmer bezels and the move from a 16:9 aspect ratio to an 18:9 (2:1) ratio means that the new model probably won’t be much larger than its predecessor.

Other specs revealed by the leaked images include apparent confirmation that the phone has dual front cameras. Both are 8MP cameras, but one has f/1.8 and f/2.2 aperture settings while the other only has an f/1.8 aperture.