The Google Pixel 2 is probably the next phone I’m going to buy.

It’s a powerful phone with an excellent camera, well thought-out software, sturdy (if rather mundane) design, and decent battery life. As a Pixel device, it also comes with a few perks including a guaranteed 3 years of security and feature updates and the ability to backup original quality photos and videos to the cloud using Google Photos for free through 2020. 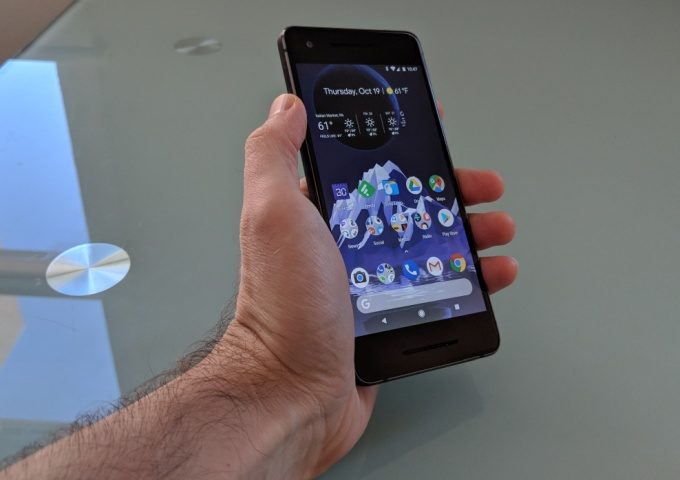 Google released two Pixel phones this month. The 6 inch model is getting a lot of attention thanks to its thin bezels and its 18:9 aspect ratio display.

But I find the 5 inch model hits the sweet spot. It has a lower-resolution display, thicker bezels, and a smaller battery. But it’s $200 cheaper, with a starting price of $650.

The 5 inch Pixel is also easier to hold and use with one hand, and it arguably has a better looking display (although there’s some debate on the issue).

The only thing that really bugs me about this phone is that it lacks a headphone jack. But I can get over that, since it’s a feature I rarely use anyway.

Your list of dealbreakers may be different than mine, so I should point out that the phone also lacks wireless charging and it doesn’t have a microSD card slot.

That makes the phone a lot pricier than mid-range devices like the Moto X4 Android One Edition, but reasonably affordable compared to the latest flagships from Samsung, HTC, LG, and Apple. It’s also one of the relatively rare examples of a “small” phone that has almost all the same features as its larger sibling. 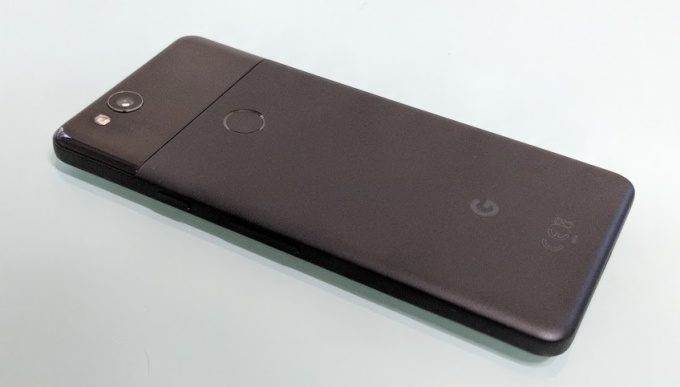 What it lacks is a particularly modern design. The Pixel 2 looks a lot like the first-gen Pixel from 2016. It has a metal-and-glass design, although the glass “window” at the top of the back is smaller on the new phone than on last year’s model.

One important upgrade? The Pixel 2 has an IP67 water resistance rating, which means it’s safe to get the phone wet. Oh, and Google put stereo front-facing speakers in this year’s phone. The original Pixel had just a single speaker. 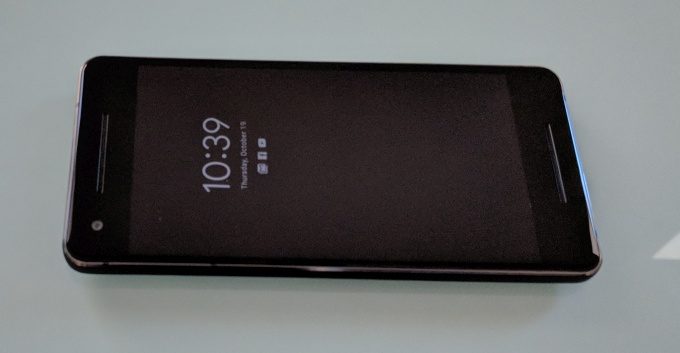 The volume and power buttons are on right side of the phone. There’s a SIM card tray on the right. And there’s a USB Type-C port on the bottom. That’s the only port you’ll find, since there’s no dedicated headphone jack.

Google does ship a USB Type-C to 3.5mm headphone adapter with the phone, but it won’t be very useful if you want to charge the phone and listen to music using headphones at the same time. So you might want to invest in some Bluetooth headphones. 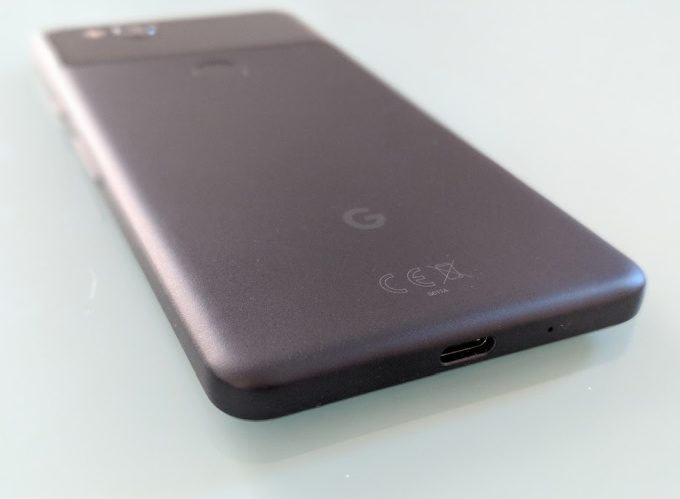 There’s a Pixel Imprint fingerprint sensor on the back of the phone, where it’s easy reach with a finger while holding the phone in your hand (but hard to reach if the phone is lying flat on a table with the screen facing upward). 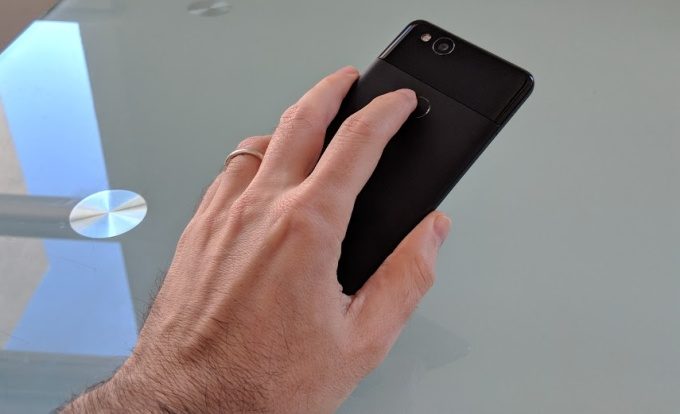 The 12.2MP rear camera and LED flash are near the top left corner of the back of the phone. It’s slightly raised, but the bump is subtle.

Google put the 8MP front-facing camera to the left of the top speaker, and there’s also a notification LED light to the right of the speaker.

The Pixel 2 and Pixel 2 XL have stellar camera hardware and software, and they’re capable of capturing some amazing shots. Portrait mode is achieved using software algorithms, so it doesn’t require dual cameras. The results aren’t always perfect — if you zoom in on a Pixel 2 portrait you can usually find some element that was blurred which shouldn’t have been, or vice versa. But the camera’s strong performance in low-light, speedy autofocus, and generally superb image quality help make it one of the best around. 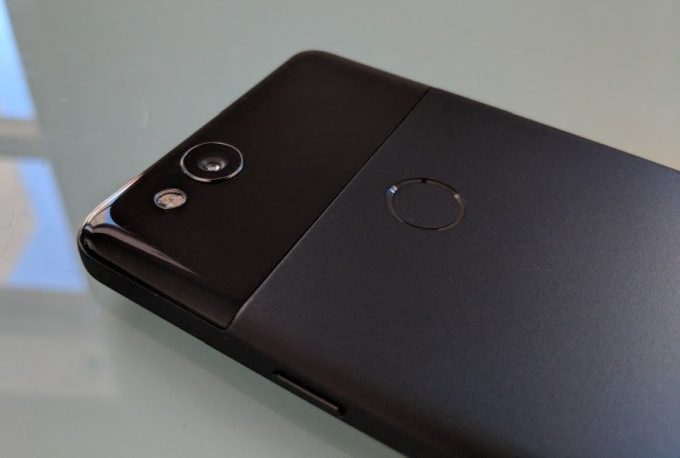 If the lack of the headphone jack is my least favorite thing about this phone, the camera is my favorite thing. Well that, plus 3 years of guaranteed software updates delivered directly by Google.

For more details on the camera, software, and overall performance, check out these sections of the Pixel 2 review:

The Pixel 2 is available unlocked from the Google Store and other retailers for $650 and up. If you want to buy one from a carrier, you’ve got two options: Verizon and Google’s Project Fi network.

But if you shop around, you might be able to find some interesting deals. Best Buy is offering up to $300 in trade-in value when you buy a phone, plus an extra $100 off when you activate the phone with Verizon.

You can also pay for the phone in installments if it’s easier to stomach the idea of paying $27 per month for 2 years than $650 all at once.

The phone does support all US wireless networks, and while T-Mobile isn’t an official launch partner, the carrier is offering up to 50 percent off the price of a 64GB Pixel 2 if you bring the phone to T-Mobile. 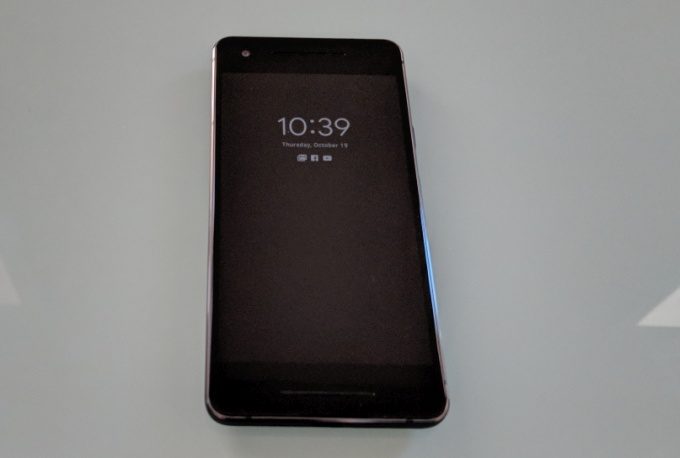 The phone has a SIM Card slot, and when Google sent me a demo unit to review, they also sent a Verizon SIM card, but I didn’t bother using it since I’ already a Project Fi customers. The Pixel 2 has an eSIM feature that allows you to use it with Project Fi without a physical SIM card.

All I had to do is login to my account using the Project Fi app, tell it to move my number from my Nexus 5X to the Pixel 2, and a few minutes later I could make and receive calls.

Transferring data from my old phone was also ridiculously easy. Just plug the USB Type-C cable that comes with the Pixel 2 into both phones during the setup process and it’ll copy your account information, settings, and even your wallpaper to the new device, as well as a list of installed apps (which will be grayed out on the home screen until they’re downloaded from the Play Store. You can also choose to move music between phones.

The whole process takes around 5-10 minutes.

Google offers the Pixel 2 in black, white, or blue, but the demo unit Google loaned me is black.

Along with the phone, Google sent a Live Case, which retails for $40 from the Google Store. It’s a sturdy case that offers plenty of protection. But it also feels a little bulky, and the fingerprint sensor is recessed a bit more than I’d like when the case is on the phone. It also makes swiping from the edge of the phone a little more difficult.

If and when I buy the Pixel 2, I’ll probably investigate slightly less bulky case options. Since this unit is a loaner, I threw caution to the wind and used it without a case for most of the past week.

Oh, and here’s an unboxing video I shot when the Pixel 2 and Pixel 2 XL first arrived:

The Pixel 2 is a great phone with excellent hardware and performance, a relatively boring design, respectable (but not amazing) battery life, and the best camera available in a smartphone today (if you don’t need dual cameras).

It’s also the rare example of a 5 inch phone with almost the features packed into its larger sibling. While a 5 inch phone wouldn’t have been considered “small” a few years ago, these days it’s a positively compact device.

Is this the best phone for everybody? Not necessarily. Here’s a brief list of cons:

But as much as I wanted to jump on the $400 bandwagon and replace my aging Nexus 5X with a Moto X4 Android One phone, I just couldn’t get past the mediocre camera on Motorola’s phone.

That’s a shame, because while the Moto X4 doesn’t exactly have bleeding edge hardware, it’s fast enough for most daily activities, and it gets better battery life than the Pixel 2. 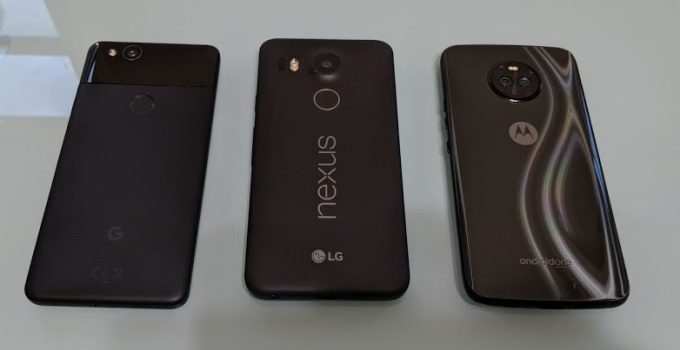 But here’s how I’m justifying the fact that I’ll probably pick up a Pixel 2 by the end of the year: it’s not just replacing my old phone. It’s also probably going to replace my old camera for everything that doesn’t require a superzoom lens. The Pixel 2 could seriously lighten my CES 2018 gear bag.

The fact that it’ll continue to run the latest software from Google and receive the latest security updates through 2020 is also a nice perk, and one that you won’t get with pretty much any other Android smartphone. Aside from the camera, that’s probably the best thing about the Pixel 2.

But while those may be some of the phone’s best features, there are a lot of great things about the Pixel 2, including some that I initially thought would be gimmicky.

For example, I’ve found the always-on display feature to be strangely compelling. Initially I thought I’d turn it off in order to extend the phone’s battery life. But it actually has very little impact on the phone’s run time and when I leave my phone on my desk during the day, it’s nice to be able to glance at it to see the time and any notifications without having to turn on the display. 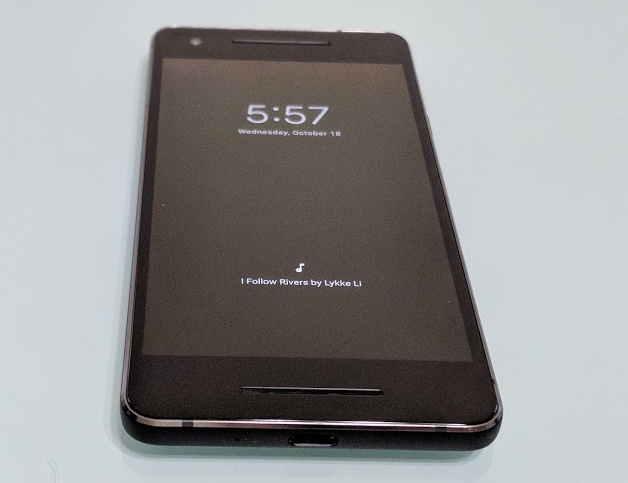 The Now Playing feature that identifies songs that are playing nearby still feels like a gimmick.. but it’s a kind of nifty one. And while I don’t actually use Google Assistant very often, I do find that squeezing the phone to launch it feels more natural than talking to my Pixel 2.

So yeah, there’s a long list of things to like about this phone. Is it worth upgrading from last year’s Pixel? Probably not… unless you’re the sort of person who buys a new phone every year anyway. But it’s a huge upgrade from the 2015 Nexus 5X and Nexus 6P.

For Google-phone users like me who held onto their older phones when the first-gen Pixel came out in 2016, it looks like this year is a pretty good year to upgrade.

At $650, the Pixel 2 would be the most expensive phone I’ve ever purchased, but it’s fairly affordable compared with the latest flagships from Samsung and Apple. And Google is offering up to $115 in trade-in value for a Nexus 5X (which might be less hassle than selling it on eBay for $150), which would sort of make a 64GB Pixel to the same price as the previous most expensive phone I’ve ever paid for: the Google Nexus One, which I picked up for about $525 in 2010.