I tend to use my Android phone as a GPS device whenever I’m on long road trips… and sometimes I end up putting the phone in airplane mode just so that I don’t get distracted by notifications for incoming emails and other messages while I’m driving.

But Google recently introduced a new “Driving Do Not Disturb” option for Pixel 2 phones… and since I have a Pixel 2, I’m looking forward to using it on my next drive. When enabled, the feature can automatically detect when you’re driving and silence incoming messages and other notifications while allowing phone calls and voice navigation directions to come through.

Next year Google plans to launch a new API that will bring similar functionality to third-party apps. 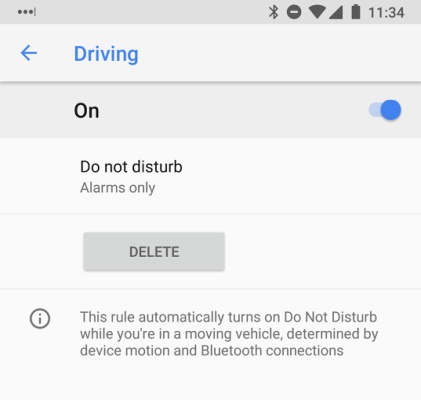 It’s called the Activity Recognition Transition API, and it’s basically the same one Google’s already using for the Driving Do Not Disturb feature.

It builds on Google’s existing Activity Recognition API, which uses WiFi, Bluetooth, and some of your phone’s sensors to detect changes from one activity to another. For example, your phone can tell if you’re walking, running, or driving.

The new API should allow third-party apps to react to activity changes. That could mean individual apps will be able to silence notifications when you’re driving, but it could also allow an app for runners to automatically launch certain features when your phone detects you’ve stopped walking and started running, for example.