Google recently released most of the source code for the Android version of its Chrome web browser. So it was just a matter of time before developers started to build their own browsers based on Chromium.

And not surprisingly, one of the first of those browsers is basically Chrome… with a built-in ad blocker. 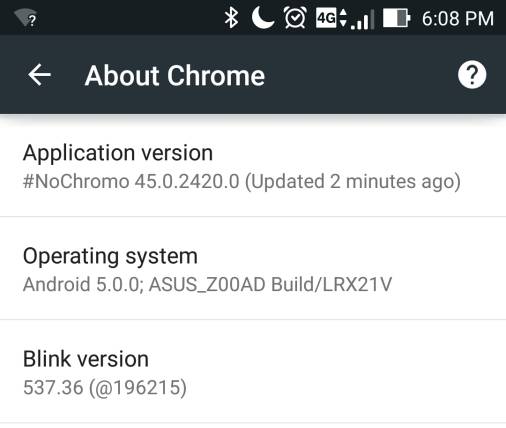 This Android browser looks and functions almost exactly like Chrome. But it will block most internet ads.

It’s not the first mobile browser with an ad-blocker. Developers have offered mobile versions of ad-blocking plugins such as Adblock Plus and uBlock for Firefox, Dolphin, and other browsers that support add-ons. Recently the Adblock Plus team even launched their own web browser which is basically a custom version of Firefox for Android with ABP baked in.

But since Google’s Chrome browser for Android doesn’t support extensions or plugins, the only way to use ad-blocking software previously was to install a utility that would block all ads delivered to a phone or tablet at a system level, not just in the web browser. This is a clunky approach that often requires root access and could cause problems with some apps.

Now that source code for Chromium makes it possible to build your own Chrome-based browser, we may see other custom versions of the browser with other features built in. I’d love to see a version that supports extensions… but for now I have mixed feelings about #NoChromo.

On the one hand, I’m always impressed when developers take the tools available to them, mix them up in interesting ways, and create something new that can offer a better user experience. Many websites do load more quickly and look better when you remove the ads.

On the the other hand, sites like this one rely on advertising for revenue and if a large enough number of people used ad-blocking software, it could have a serious impact on the way most for-profit websites make money. Or to put it more bluntly, I can afford to work full-time on this website because it brings in enough revenue to justify my treating it as a full-time job.

So I personally don’t use ad blocking software when I surf the web, and on Liliputing I also try not to accept annoying ads that play automatically or cover up the content.

But I’m still kind of impressed at just how quickly someone managed to make an ad-blocking version of Chrome for Android. I’d be even more impressed if there were an option to whitelist ads from sites you want to support though (hint hint).

The developer is also making no promises to keep #NoChromo up to date, and there’s a chance that it may not support some web content due to the few bits of Chrome for Android that were not open-sourced (including some media codecs). So proceed with caution… or at least keep another web browser around in case you run into trouble.