Google Now is a service that examines your search history and daily routines to try to present you with information you want before you even ask for it. For instance, it can show you cards with weather or traffic updates before you leave for work in the morning, or sports scores from last night’s game, if that’s something you usually search for while eating breakfast.

While Google Now started out as an Android exclusive, it’s now included in the Google Search app for iOS. That means you can use Google Now on an iPhone, iPad, or iPod touch. It’s just not quite as powerful on those devices as it is on an Android phone or tablet. 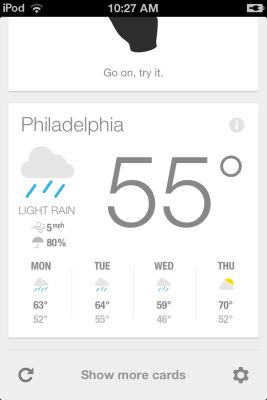 That’s because it’s not as tightly integrated into iOS as it is Android. On an Android device Google Now can provide a system notification when there’s relevant data available. When you’re using an iPhone you’ll have to fire up the Google Search app before you see a card.

On Android you can also launch Google Now by swiping up from the bottom of your screen. If you’re using iOS, you’ll have to tap the Google Search icon to load the app.

Apple phone or tablet users also won’t get all of the cards available for Android. Airline boarding passes, Fandango, and Zillow are a few of the missing features.

That said, if you’re a fan of Google services but prefer Apple hardware to anything you can get from Samsung, HTC, or LG, you can bring one of Android’s most intriguing features to iOS by updating to Google Search 3.0.

One reply on “Google Now arrives for iPhone, iPad, and iPod touch (but it’s more useful on Android)”