Google is now selling the Nexus 7 tablet in 3 more European nations. German, French, and Spanish folks can now order the 7 inch Android tablet from the Google Play Store in their respective countries. 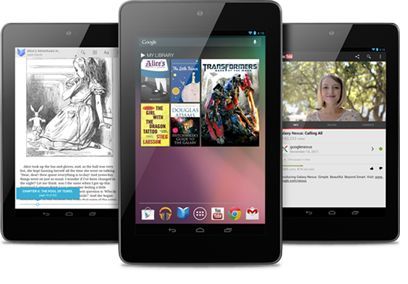 That’s about $249 to $311 US, which is a bit more than the tablets sell for in the States. But consumer electronics tend to cost more on that side of the Atlantic where taxes are higher.

The Google Nexus 7 features a 7 inch, 1280 x 800 pixel display, an NVIDIA Tegra 3 quad-core processor, 1GB of RAM, WiFi, Bluetooth, and a front-facing camera. It was the first tablet to ship with Android 4.1 Jelly Bean, and even if it’s a bit more expensive in Europe than in the US, it’s probably the best tablet you can find for the price.

Google hasn’t yet made its digital music or digital magazine stores available outside the US, but Android is a relatively open platform and there’s nothing stopping users from grabbing their digital media from other sources. Meanwhile Android Police reports the Play Music and Play Books stores are both available in France, Germany, and Spain.

The Nexus 7 is also available in the UK, Canada, and Australia.

One reply on “Google Nexus 7 launches in Germany, France, and Spain”