Just when you thought there wasn’t anything left to learn about the upcoming Google Nexus smartphones, along comes a series of leaked slides which provide even more details.

Android Police spotted the slides on Imgur, which remove some of the last pieces of mystery surrounding the 5.7 inch Google Nexus 6P. 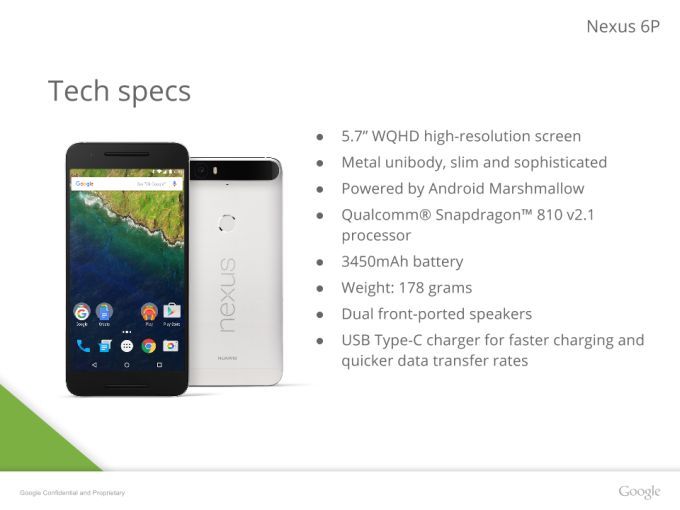 Here are a few of the new details provided by the slides, which appear to be designed for marketing purposes:

Other details confirmed by the slides include the fact that the phone will have a 5.7 inch, 2560 x 1440 pixel display, a Qualcomm Snapdragon 810 v2.1 processor, 32GB to 128GB of storage, stereo front-facing speakers, a USB Type-C connector, and Android 6.0 Marshmallow software. There’s a  fingerprint sensor on the back of the phone, below the camera, which you can use to unlock the phone, among other things.

Google also appears to be emphasizing the camera, which the slides say is designed to take decent photos in low-light situations using a new Google Camera app which allows for faster focus and capture.

The phone weighs 178 grams, or about 6.2 ounces and the slides confirm it will be available in several colors: aluminum, graphite, and frost. There’s also a gold color option, which appears to be exclusively available in Japan at launch.