Google’s next-generation Nexus phone has been showing up in videos, photos, FCC documents, and other places for a few weeks. Now a few new photos and videos of the Google Nexus 5 have surfaced, giving us the best look at the phone yet… which isn’t saying much.

9To5Google received a tip with a few pictures of the phone’s front and back, and some (very) short videos showing the handset starting up and shutting down. 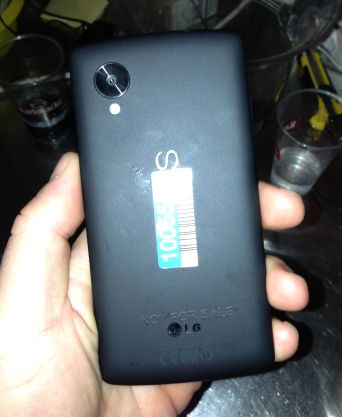 Unfortunately, there’s almost nothing new to be learned from these new pictures and videos — but they do seem to confirm that a new Nexus phone manufactured by LG is on the way, and that it has a large screen.

All signs point to this being a modified version of the LG G2 smartphone, with power and volume buttons on the sides of the device rather than on the back. If that’s true, it means we’re looking at a phone with a 5.2 inch, 1920 x 1080 pixel display and a Qualcomm Snapdragon 800 quad-core processor.

The images just show a startup animation, shut-down animation, and a lock screen that looks a lot like the one you’d get from Android 4.3 Jelly Bean. It’s possible the phone will ship with Android 4.4 KitKat, but there’s no way to know that from these videos.

You can find more images at 9to5Google.