In fact, while neither Google nor LG have announced the new device yet, about the only things we don’t know for certain are the price and launch date.

Now we might have a few new clues about those. 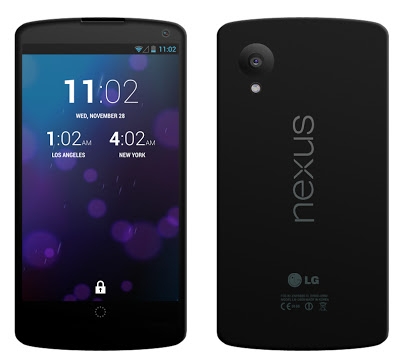 Japanese retailer Gekko & Co has posted a product page for the Google Nexus 5 with an estimated ship date of November 14th and pre-orders that start today.

I’d take that with a big grain of salt, since the product page (as seen through Google Translate” has some rather unprofessional sounding language discussing how Gekko & Co isn’t well known to individuals, but suggesting the company is familiar to industry types… if the store feels the need to spell that out, that I kind of question whether it’s true.

Elsewhere in Nexus 5 leaks, Phone Arena received an anonymous tip suggesting that Google would keep the $299 starting price for its next-gen smartphone. That’s the same price that the company charged for the Nexus 4 when that phone launched in 2012.

But the new Nexus 5 will have a faster CPU, bigger screen, better camera, and 16GB of storage, rather than 8GB. It’s also expected to have a 2300mAh battery.

According to Phone Arena, Google will offer a second model with 32GB of storage and a larger 3000mAh battery, but that model will cost $399.

Those prices are lower than those mentioned in the Gekko & Co product listing, but it’s likely that the phones would be cheaper in the States than Japan.

That’s still a pretty great price for an unlocked phone with those specs, but if you don’t need the extra storage or battery life, the $299 model may be one of the best bargains around… if the rumors are true.

They might not be — but with the amount of information about the Google Nexus 5 floating around, it probably won’t be long before we see an official announcement.

via G for Games and Android Community