The Google Nexus 5 is a great smartphone that was released in 2013. But like many of the best phones on the market these days, it has a battery that’s not meant to be replaced.

I’ve been using a Nexus 5 as my primary phone since shortly after it was released… and while the phone never got stellar battery life, the battery runs down a lot more quickly today than it did a year ago.

So I decided to throw caution to the wind and try replacing the battery myself. 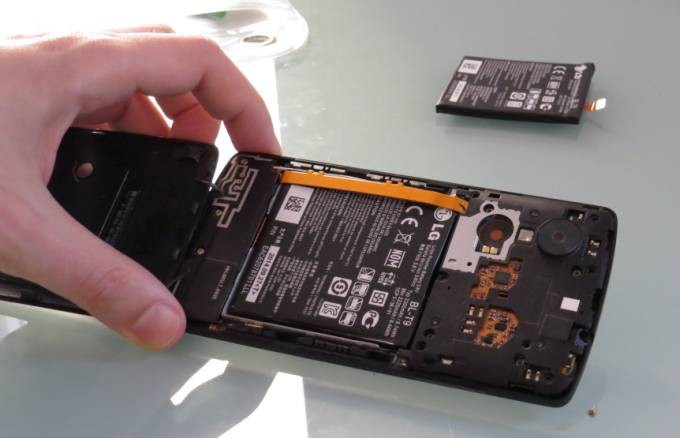 There are a number of places to pick up spare Nexus 5 batteries. I found one that sells for $10.65 on Amazon and which has mostly positive reviews from customers. Shipping was free but slow, but the battery seems to be exactly as described.

Update: After using the phone with the new battery for about a week, I’m not sure I’d recommend buying one from the same source I used. Battery life seems no better, and maybe even a little worse. I suspect the cheap battery I bought may have been used or refurbished. Theoretically the battery upgrade process could help prolong the life of a phone, but only if you can be certain that you’re replacing the original battery with a better/fresher one.

I already had a set of device opening tools, so the total cost of this project would have been less than $11… if I hadn’t broken a few of those plastic tools while trying to open the phone’s case. I’ve still got a few sturdy metal tools though, so I haven’t decided whether to order replacements yet.

Anyway, what you need to do is slide a narrow, sturdy piece of plastic or metal into the side of the phone, where the back cover meets the rest of the phone’s case and try to pry open the plastic latches holding the cover in place. It takes patience to do this without breaking the case — so proceed with caution.

It took me about 10 to 15 minutes to get the case open. Near the bottom of the phone there’s some adhesive, so you’ll need to apply a little extra pressure to open that section.

Once the cover is off, you need to remove a plate that covers the motherboard by removing 6 screws with a small Phillips screwdriver. Then lift the plate away from the rest of the phone.

There’s a daughterboard connector covering the battery. You can lift this pretty easily with a spudger tool or with your fingers. There’s also a smaller battery connector which you’ll need to remove.

Finally, there’s some adhesive holding the battery in place, so you’ll need to use a sturdy plastic or metal tool to pry the battery away.

Once all of that is done, just insert the new battery, attach it to the motherboard, re-attach the daughterboard connector and reverse the rest of the steps.

While the video shows an overview of the process, I’m working with a new camera and tripod and I had a nasty habit of filming my hands instead of the phone. So if you want some better pictures of the process, check out the battery replacement guide at iFixit.

I’ve been on a battery replacing kick lately. Last month I replaced the battery in my Samsung Series 9 ultrabook: another device that wasn’t supposed to have a user serviceable battery.

The laptop runs for about an hour longer on a charge than it did before the battery surgery, and I’m hoping that’s good enough to keep me from spending money on a new laptop before the end of the year.