Google has started taking orders for the Nexus 4 smartphone and Nexus 10 tablet in the US. And just like in Europe and Australia, the US launch has been riddled with problems.

As Google’s servers are getting hammered by customers trying to place orders, more often than not they’re being greeted by error messages that let them know the transaction cannot be completed. 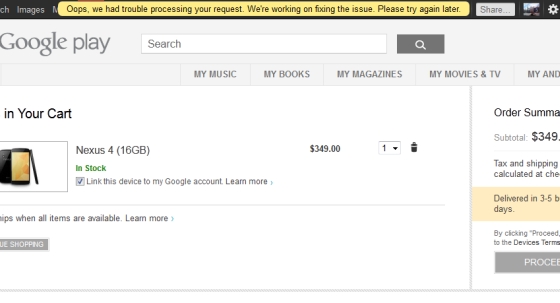 When orders went live, both the 8GB and 16GB models of the Google Nexus 4 smartphone were available to add to a cart. But the 16GB model quickly disappeared, replaced instead with Google’s “coming soon” note.

If you refreshed the page enough times (like I did), you might have noticed that sometimes the “add to cart” button showed up again. But clicking “proceed” rarely gets you anywhere — .

Update: It’s a good thing I pretty much gave up at that point, or I might have ordered 2 or more phones. 38 minutes after getting a notice saying my card wasn’t charged, Google sent me a note to thank me for my order and letting me know that a Nexus 4 would be delivered in 3-5 business days.

Meanwhile, demand has apparently been so great that Google has decided not to even bother taking orders in some countries yet, to help make more devices available in other regions.

I’m guessing someone underestimated demand for the new $299 and $349 phones… by a lot.

Anyway, it looks like I won’t be getting a Google Nexus 4 today.

45 replies on “Google Nexus 4, Nexus 10 launch in the US… good luck getting one”