Google is launching the first Nexus tablet with a 10 inch display on October 13th. The Google Nexus 10 will be available from the Google Play Store in the US, UK, Australia, France, Germany, Spain, Canada, and Japan for $399 and up.

As expected, the tablet is built by Samsung and features the same speedy 1.7 GHz Samsung Exynos 5250 ARM Cortex-A15 dual core processor found in the Samsung Chromebook. The Google Nexus 10 will also sport a 10.1 inch, 2560 x 1600 pixel display with 300 pixels per inch. 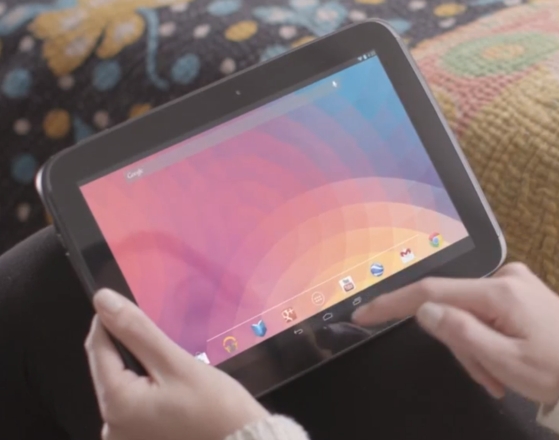 Google’s new tablet features 2GB of RAM, a Mali T604 graphics core, a 5MP rear camera, and a 1.9MP front-facing camera. It has a 9,000mAh battery which should provide up to 9 hours of battery life.

The Nexus 10 has front-facing stereo speakers, microHDMI, microUSB, and NFC chips on the front and back of the tablet. The tablet runs Google Android 4.2 Jelly Bean.

There’s no microSD card slot for extra storage, so if you think you might want the extra space you’re probably going to want to shell out some cash for the higher capacity model.

Of course, Google really wants you to use Google Music to store your music collection, stream videos from YouTube and Google Play, and generally rely on the internet. After all, Google is first and foremost a company that provides online services.

But some modern Android games can take up a few gigs of disk space, and HD videos take up an awful lot of space too, so it wouldn’t be hard to fill 16GB of storage pretty quickly.