Google Play Music lets you upload as many as 20,000 songs to Google’s servers and then stream them to any device with a web browser or mobile app. You can also re-download songs you’ve uploaded, which makes it a useful service for backing up your music collection.

But uploading thousands of songs takes a lot of time. Now Google is saving some time, bandwidth, and hard drive space with a new music matching feature. 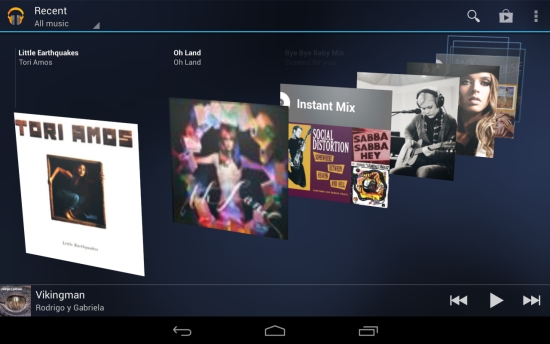 Here’s how it works. When you install the Google Play Music client on your computer, it will scan your songs. If Google already has some of the same songs in its Play Music Store, you won’t have to upload them to your account. They’ll be added to your online storage locker automatically.

In fact, even if you have low bit-rate MP3 files, Google will let you stream 320 kbps versions of those tracks. If you want to download those files later though, you’ll get the same bitrate as what you started with. Google won’t convert your 64 kbps files into 320 kbps files.

Any music you have that Google doesn’t recognize will still be uploaded. So the more obscure your music tastes, the longer it will take to put all your music in the cloud.

Apple and Amazon offer a similar music matching service. But those companies charge $25 per year for access (which they turn over to record companies who are worried that this sort of service is basically a laundering service that turns illegally downloaded MP3s into perfectly legal music files).

According to All Things D, Google is also paying record labels some money to keep them happy — but the company isn’t passing that cost on to users.

The move could make Google Play Music a more attractive service for some customers… and once you’re locked into the ecosystem, you might be more likely to buy music from Google — which could help make up for any lost revenue. Maybe.

Personally I’ve been pretty happy to buy music from Amazon, download it to my computer, and upload it to Google Play — since I tend to prefer the Amazon MP3 music store but I prefer Google’s personal music locker service.

3 replies on “Google Music gets matching feature, saves you from uploading 20,000 songs”