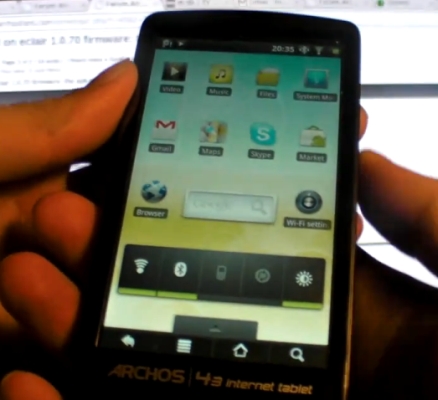 Well that didn’t take long. A member of the ArchosFans community has launched a new app that lets you install the Android Market and the full suite of Google apps on the new Archos tablets including the Archos 28, Archos 32, and Archos 43.

People have been installing a hacked version of the Google suite of Android apps on the Archos 5 Internet Tablet for a while, but since the new Archos tablets run Android 2.1 (and will soon be updated to Android 2.2), the original hack doesn’t work. The new app, on the other hand, seems to work quite nicely.

Not only does it install the Android Market, making it much easier to download and install apps on the new Archos tablets, but you also get Google’s Gmail app, Google Maps, Google Talk, and Google Calendar. Some users have reported a few minor problems. For instance, a strange symbol on the top of the Calendar app, and at least one user somehow managed to end up with an Archos tablet that won’t boot after installing the update — although it appears that may be because he didn’t have enough free storage space on his device to properly install all the packages.

In order to install the new hack, download the gApps4Archos.apk file from one of the links at the ArchosFans Forum thread, plug your device into your computer and mount it as a mass storage device, copy the apk file to your Archos device, unmount, and then use the Archos file explorer to locate the file and tap on it to start the installation process.

Just keep in mind, this is an unofficial update that’s not supported by Archos or Google, so if you run into any problems don’t expect any help from them. On the other hand, now that the hack is in the wild, I suspect there will be a lot of discussion in the Archos user community.

ArchosFans editor Charbax has put together a demo video which you can check out after the break. Only the first portion actually deals with the gApps4Archos file, while the rest looks at gaming and Skype on the Archos 43.

24 replies on “Google Marketplace hack for the new Archos tablets”