Apple’s latest mobile operating system offers improvements for Siri voice assist, Facebook integration, support for FaceTime video calls over cellular networks, and much more. But iOS 6 also lacks a few things that earlier versions of the OS had, including a built-in YouTube app and Google Maps.

Instead, Apple has introduced its own Maps app with support for turn-by-turn navigation. But it doesn’t offer public transit directions and many users have complained that Apple Maps isn’t as accurate or detailed as Google Maps. 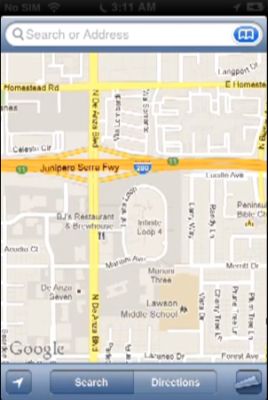 One solution is to simply visit maps.google.com in the Safari web browser to view the mobile web version of Google Maps. But soon there may be another option.

Developer Ryan Petrich is in the process of porting the Google Maps app for iOS 5.1 to run on iOS 6. He’s posted a video showing it in action on an iPhone 3GS.

Right now this is a work in progress, and it requires a jailbroken device. But if Petrich can works out some of the kinks before Google submits its own app to the App Store (if Apple will even allow that), his solution could offer some hope to long-time iOS users who are lamenting the absence of Google Maps on the iPhone 5 and other devices running iOS 6.