Google is now offering a Beta Channel of its Chrome web browser for Google Android 4.0 and later. Just like the desktop version, Chrome Beta for Android offers a chance to check out new features and improvements before they’re widely available in the stable channel.

On the other hand, it also means that you get to experience bugs that will probably be squashed by the time they make it to the Stable channel. 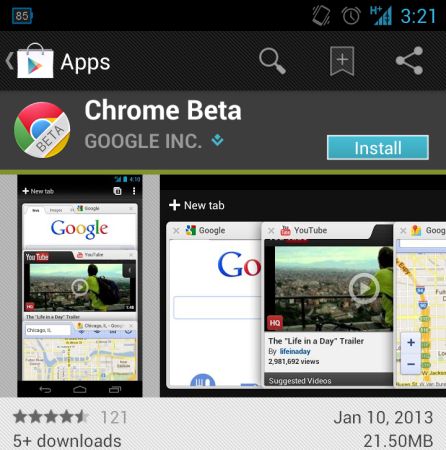 The first beta version of Chrome for Android is Chrome 25, and among other things, it offers improved HTML5 and JavaScript performance. But there’s a long list of known problems including generally sluggish performance, particularly on the Galaxy Nexus and Nexus S smartphones.

Text auto-sizing can break formatting on some website, and you can’t edit bookmarks.

Google will push regular updates, and you can configure the beta channel to automatically install them. The last stable version of Chrome for Android, by the way, was Chrome 18.