Google launched the original Pixel in 2013, delivering a Chromebook with a high-resolution touchscreen display, an excellent keyboard and touchpad, and a $1299 price tag.

Now Google is updating the Pixel with a new 2015 model. They’re still premium notebooks, but they’re a bit more affordable with prices starting at $999. 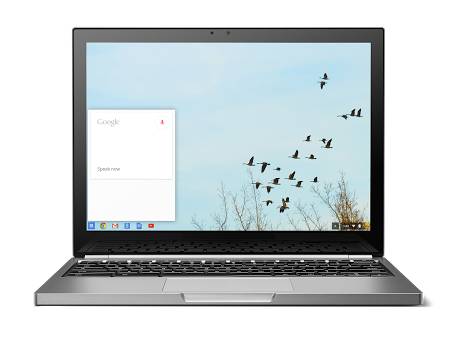 The new Chromebook Pixel features an Intel Broadwell processor, a 12.85 inch 2560 x 1700 pixel display, up to 16GB of RAM, two USB Type C connectors with support for reversible cables, a backlit keyboard, and up to 12 hours of battery life.

The Type-C ports are also charging ports: you can plug your power adapter into a port on either side of the laptop to charge the battery.

The 2015 Chromebook Pixel also supports fast-charging, which means you can get up to 2 hours of battery life from a 15 minute charge.

Google positions the Chromebook Pixel not only as a premium Chrome OS laptop, but also as a device to showcase the Chrome platform. It’s aimed at developers and enthusiasts. Only a limited number are produced… because Google doesn’t really expect to sell a lot of high-priced laptops designed to run a browser-based operating system.

Still, it’s nice to see new models with more powerful hardware and lower prices. And honestly, the prices wouldn’t seem that high for this kind of hardware if it weren’t for the relatively small SSDs and the fact that there are still some things that are tough to do in Chrome OS (although you can get around that issue by loading Ubuntu or another GNU/Linux operating system using Crouton or another tool).

Both new Chromebook models are available from the new Google Store which showcases devices running Chrome OS, Android, and Android Wear as well as other products like the Chromecast media streamer and Nest smart thermostat. Basically it’s like the Google Play Store, but specifically for hardware and accessories.