Neither of those apps work anymore.

Google just rolled out an update for the Chromecast’s software, and it seems to disable support for streaming content directly from a PC or mobile device to the $35 media streaming box.

Update: Google clarifies that the Chromecast could eventually support local video streaming — but that the official SDK is still very much a work in progress that will likely change several more times before it exits the developer preview stage. 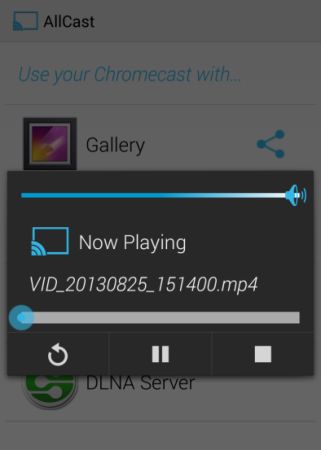 That’s a shame, because these third party apps made the Chromecast a whole lot more useful — and Koushik Dutta was even working with the CyanogenMod team so that future versions of that version of Android would let users stream anything on their phones or tablets to a TV.

But it’s also not terribly surprising, because what Google really wants to let you do with a Chromecast is stream internet video from sites like YouTube, Netflix, and Google Play Movies. In fact, when you’re using Google’s official Chromecast software, you’re not sending a video from your phone or PC to a TV at all. Instead, you’re sending a command to the Chromecast which tells the little device to go ahead and start streaming the content directly from the internet. That way playback continues even if you turn off your phone or computer.

If you’ve been following the internet video streaming space for the last few years, you’ll know that the folks who own the copyrights to some of the best content tend to exert control over how it’s viewed. For instance, if you want to stream movies or TV shows from the Hulu website, you can do it for free (in the US) on most desktop or laptop computers. But if you want to use an Android or iOS phone or tablet, you’ll need to pay $7.99 per month for a Hulu Plus subscription. You’ll also need the subscription if you want to stream Hulu to your TV using a Roku or other media streaming box.

So if Google really wants companies like Hulu to get on board with the Chromecast platform, the company may feel pressure to lock down the ecosystem so that only approved apps and functions work.

On the other hand, there’s been a way to stream local videos from your PC to a Chromecast since day one — and it continues to work even after the latest software update. All you have to do is install the Google Cast extension for the Google Chrome web browser, then drag and drop a video into a browser tab. Then hit the Cast icon in the Chrome toolbar and choose to display that browser tab on your TV. If you have a reasonably fast computer, it’ll transcode the video in real-time and send it your Chromecast over your WiFi network at resolutions up to 720p.


You can also use the same tab-casting feature to stream Hulu content to your Chromecast — free of charge, although you’re stuck with the same 720p limitation.

It seems a little odd that Google built in this local content loophole into the Chromecast and Google Cast software, but decided to crack down on third-party apps like Fling and AllCast.

It’s worth remembering that Google still hasn’t released the official SDK (software developer kit) for Google Cast. There’s only a beta SDK available and it’s still subject to change. AllCast and Fling were both designed to work without using Google’s SDK, so there was always a risk that Google could make a change that would disable those apps. And unlike Android and Chrome OS, both of which are based on open source software, Google has never promised the Chromecast would be an open source protocol.