It’s been eight years since Google annoyed a vast portion of the internet by killing off Google Reader, it’s web-based RSS reader. Now the company is embracing RSS again… kind of.

Google has announced a new feature that will begin rolling out to some users of its Chrome Canary app for Android soon. When you visit a website that has an RSS feed, you’ll be able to hit a Follow button. Then when you open a new browser tab, you’ll see a Following section that will feature the latest updates from sites that you follow. 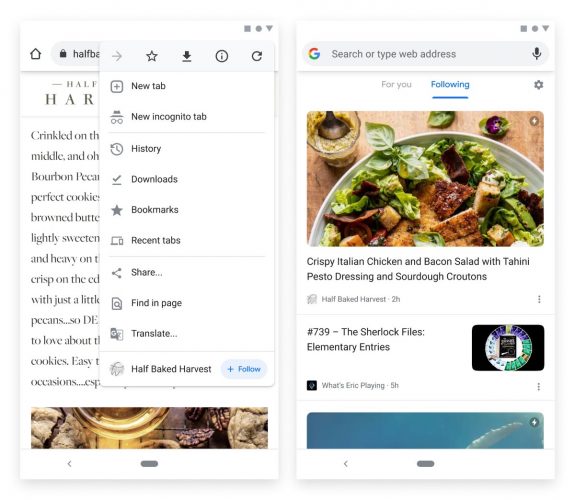 It’s not really a full-fledged RSS reader like Google Reader or newer alternatives like Feedly, Inoreader, or NewsBlur. It’s more like Google discovery feature, except instead of using your browsing history to build a profile of the type of content you’re likely to see, it will let you follow sites that you like.

Still, it represents a new use for a very old web technology that Google has largely ignored in recent years.

RSS, which stands for Really Simple Syndication, is a protocol that’s been around for more than two decades, and which allows users to subscribe to receive updates when new content is available from websites. I’d have a hard time doing my job without it – I used to use Google Reader to keep track of new content from hundreds of different websites, and I’ve been using Feedly for the same purpose since Google Reader was killed off.

RSS is also a key technology used in podcast delivery – Apple Podcasts and other podcast directories typically use RSS feeds to detect when new episodes of a show are available.

The new Chrome “Follow” feature appears to be an experiment for now. It will only be available in the Canary channel at launch, which is basically the developer preview or alpha channel for Google’s web browser. And Google is only planning to roll out Follow functionality to “some Android users in the US” in the coming weeks.

So it remains to be seen whether this will become a significant part of Google Chrome’s content discovery feature set moving forward, or if it’s just another experiment that will eventually end up in the Google Graveyard.