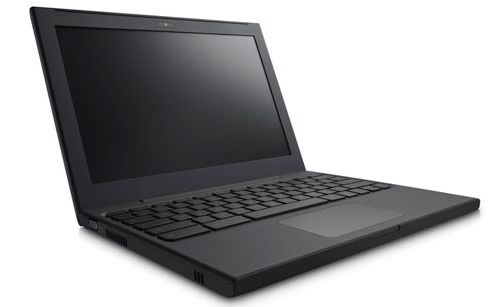 Google has unveiled the first notebook designed to run the Chrome OS operating system. It’s not really meant for the general public, but the new Cr-48 is a 12 inch notebook that will be available as part of a pilot program for developers and other testers. While the Cr-48 isn’t supposed to be a consumer laptop, it gives us an idea of what Google expects from its hardware partners.

The laptop has a 12.1 inch display, full sized keyboard, and large clickpad (a touchpad with integrated clicking action instead of separate mouse buttons). It will have an integrated Qualcomm Gobi 3G wireless chip. In the US, users will be able to use the Cr-48 on Verizon’s wireless network, but it should work with a wide range of wireless carriers around the globe. The notebook also has 802.11n dual band WiFi and a webcam.

Google claims it will have more than 8 hours of run time, or 8 hours of standby time.

Google is accepting applications from users who want to participate in the pilot program by testing the Cr-48.

If you’re looking for a consumer-oriented netbook you’re going to have to wait until mid-2011, when Acer and Samsung are expected to launch some of the first Chrome OS notebooks.

There aren’t a lot of details about the Acer and Chrome models, aside from the fact that they’ll be powered by Intel chips… but that’s not surprising considering the operating system and the hardware are still under development.

We do know that Google has partnered with Verizon in the US so that every Google Chrome OS notebook that’s available will come with 100MB per month of free data access, with additional bandwidth available from a variety of plans starting at $9.99 per day for unlimited access.

You can find a few more images of the Cr-48 after the break.