Acer’s newest Chromebook is the least expensive Chrome OS device to date. The Acer C7 Chromebook goes on sale in the US tomorrow with a starting price of $199.

But unlike Samsung’s recently introduces $249 Chromebook, the new Acer C7 doesn’t have an ARM-based processor. Instead this 11.6 inch Chrome OS laptop is powered by a 1.1 GHz Intel Celeron 847 Sandy Bridge processor. 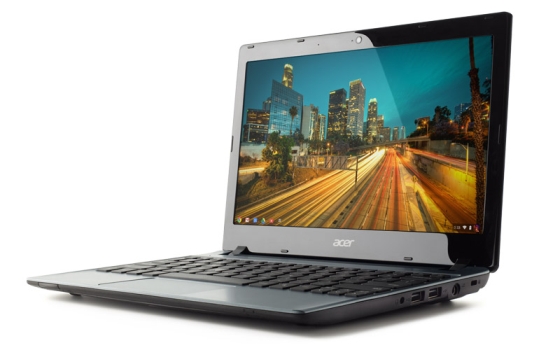 The Acer C7 is also the first Chromebook to feature a hard drive. It has a 320GB hard disk. But it still boots in a relatively quick 18 seconds, thanks to the light-weight Chrome operating system and 2GB of DDR3 RAM.

That’s not quite as fast as the latest Samsung Chromebooks (with Intel Celeron or Samsung Exynos processors). But I haven’t found many Windows laptops that can boot in under 20 seconds — especially not notebooks that sell for under $200.

While the Acer C7 is the first Chromebook with a sizeable hard drive, there is a downside. The laptop only gets an estimated 3.5 hours of battery life.

Update: Acer tells me the 3.5 hour battery life estimate was made running Windows. With the latest Chrome OS software, the laptop should get up to 4 hours of run time.

Customers will get 100GB of Google Drive storage space for 2 years with the purchase of a new Acer C7 Chromebook, just like they do if they buy other recent Chrome OS devices.

If the Acer C7 looks familiar, that’s because it looks like Acer basically took an Aspire V5-171 Windows laptop, stripped down the features a bit, and replaced Windows with Chrome OS.