Google is rolling out a new messaging app called Hangouts which combines some of the features of Google Talk and Google+ Hangouts. It’s a single service that lets you chat with friends in one-on-one conversations, participate in group chats, or make video calls. 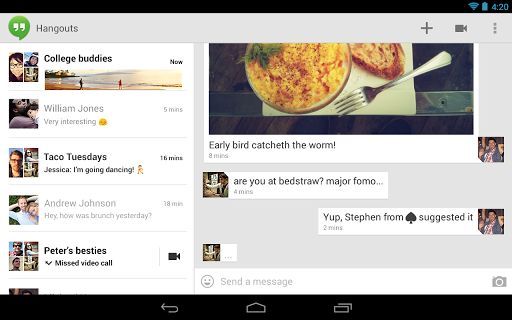 The app borrows a lot of its look and feel from Google+ and it brings some of the video functionality first seen in Google+ Hangouts, including the ability to instantly start a group video chat.

If you use Hangouts on multiple devices, notifications will be synchronized across platforms. So if you dismiss a notification on your iPad, it’ll be gone from your Android phone, for instance.

While some folks had been hoping Hangouts would also combine SMS and Google Voice into a single messaging app for Android, it’s unlikely some of those features would have been possible in the iOS and web apps.

Update: It looks like SMS integration is in the works and should be available in a future update.