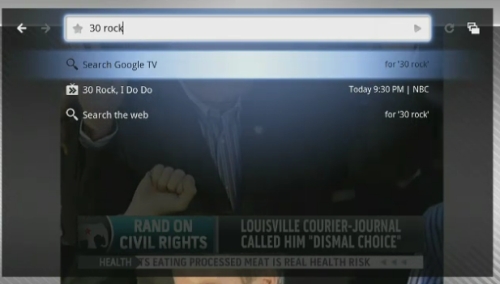 On the second day of the Google I/O developers conference, Google unveiled two new major products. The first is Android 2.2 Froyo. The new version of Google’s mobile operating system using your phone as a WiFi hot spot, installing apps to the SD card, huge speed improvements for third party apps, and support for Adobe Flash Player 10.1. You’ll also soon be able to install apps directly on Android devices by visiting the Android Market in a desktop browser. You can read a more detailed run-down of new features in Android 2.2 at Mobiputing.

The other announcement du jour was the introduction of Google TV. It’s a new platform that combines many of the best elements of the web and TV experiences. Basically, later this year you may be able to buy a TV from Sony or a set top box from Logitech or another company that will let you watch web video on your TV, surf the web, and search for upcoming shows, recording programs, or live TV using a very Google-like search box.

What’s really interesting about Google TV from my perspective is that right now the platform is built on hardware centered around an Intel atom processor with enhanced HD video support and Google Android. And Google plans to extend the Android Market so that you can install third party apps on a Google TV setup just as easily as you can install them on a smartphone. During the keynote today, a Google rep said that any app that doesn’t specifically require phone functionality should work on Google TV.

As a Home Theater PC nut, I have to admit that I’m intrigued by Google TV overall. For the most part, it doesn’t look like I’d be able to do much with it that I can’t already do with my HTPC running Windows 7 Media Center, Beyond TV, Boxee, and Hulu Desktop. But you know, a single app to rule them all would be nice — and during one part of the demo a Google rep pulled out an Android smartphone and demonstrated how he could control his TV using voice input on his phone. That was pretty cool.