The Chromebook Pixel is also the first Chrome OS laptop designed to sell for over a thousand dollars. A WiFi-only model is available starting today for $1299, while a Verizon 4G LTE model is coming soon for $1449. 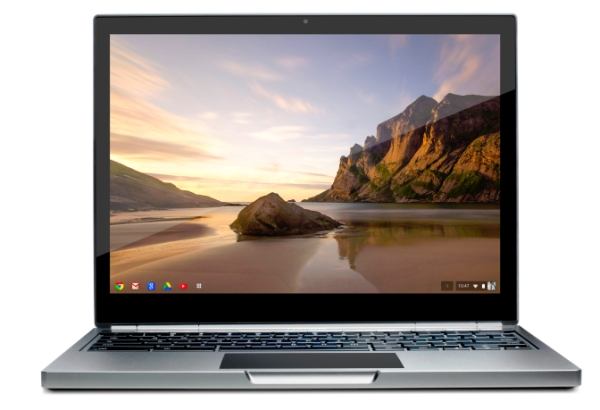 That’s a pretty steep price for a laptop that runs an operating system based on a browser. But this is by far the most powerful Chromebook to date.

Not only does it have a crazy-high resolution display, but it’s got a Core i5 processor, Intel HD 4000 integrated graphics, 4GB of RAM, and Google is throwing in 1TB of online storage at Google Drive for up to three years when you buy a Chromebook Pixel.

The notebook weighs 3.4 pounds and measures 0.6 inches thick. It has a Gorilla Glass display with a 178 degree viewing angle and 400 nit brightness, and features 2 USB 2.0 ports, an SD card slot, and a mini Display Port.

Google says the Chromebook Pixel should get up to 5 hours of battery life.

On the other hand, you don’t get a lot of local storage — the WiFi-only model has just 32GB of solid state drive space, while the 4G model has 64GB.

Chromebooks don’t generally need large amounts of local storage, because most of your data, documents, and media are supposed to be stored online. But most Chromebooks sell for under $450, which makes them cheap enough to think of as secondary computers. You can keep your movie collection on your main PC and use your cheap Chromebook on the go.

With the introduction of a $1299 Chromebook, it seems Google really wants people to start thinking of Chrome OS as a primary operating system for all their needs. Interestingly, this week the company just added support for file previews and for streaming videos uploaded to your Google Drive account.

In other words, that 1TB of online storage space you get with the purchase of a Chromebook Pixel might really be enough to justify giving up on having a computer at home where you keep all your media.

But the Chromebook Pixel will also be the first Chromebook to ship with QuickOffice software already built-in. Google bought the office suite makers recently, and the upshot is that you’ll be able to open, create, and edit office documents without an active internet connection.

Even at $1299, this is still the cheapest notebook you can buy with a Retina-like display. Apple charges an even higher price for a 13 MacBook Pro with a Retina display… although arguably you can do a lot more on a MacBook than you can on a Chromebook.

The Chromebook Pixel is already available in the US from the Google Play Store. It should be available soon from Best Buy in the US and Currys PC World in the UK.

If that demo video looks familiar, that’s because we saw parts of it in a promotional video that was apparently leaked by accident a few weeks ago.