As promised, Google has released an update to the Google app for Android Go Edition devices that can read web pages aloud, letting you listen to the web with your ears rather than reading with your eyes.

The new Google Go app is available from the Play Store, and folks with Go Edition phones should receive it as an automatic update.

If you don’t have an Android Go phone you’re out of luck… at least for now. 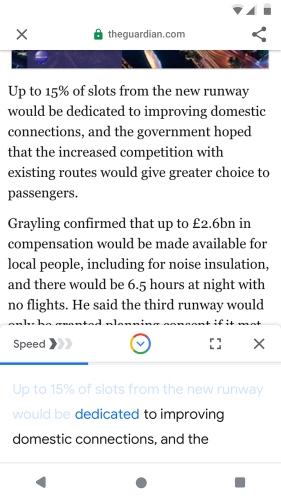 So the key differences between the Google Go app and the standard Google app are that the installer is less than 5MB and search results are delivered using 40 percent less bandwidth. For the most part, Go Edition apps offer fewer features, not more.

But the ability to listen to web pages rather than reading them is exclusive to the Google Go app for now.

It uses Google’s speech synthesis and natural language processing technology to read web pages in human-like voices in 28 different languages. You do need an internet connection for the feature to work, but Google says it doesn’t require a lot of data and can work on 2G networks.

The feature can also determine which parts of web page you probably want read, and which parts you don’t. And you can follow along with your eyes since text is highlighted as its read aloud.

You can also adjust the playback speed.

Google says “we’d like to bring the ability to listen to webpages to more Google products” in the future, so it’s possible we could see the feature brought to the main Google app, the Chrome browser, or maybe even Google Assistant-powered smart speakers one day.